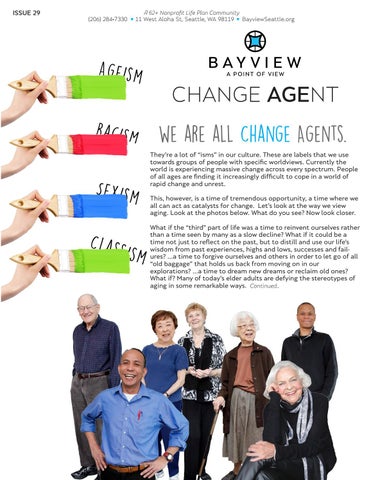 we are all Change Agents. They’re a lot of “isms” in our culture. These are labels that we use towards groups of people with specific worldviews. Currently the world is experiencing massive change across every spectrum. People of all ages are finding it increasingly difficult to cope in a world of rapid change and unrest. This, however, is a time of tremendous opportunity, a time where we all can act as catalysts for change. Let’s look at the way we view aging. Look at the photos below. What do you see? Now look closer. What if the “third” part of life was a time to reinvent ourselves rather than a time seen by many as a slow decline? What if it could be a time not just to reflect on the past, but to distill and use our life’s wisdom from past experiences, highs and lows, successes and failures? …a time to forgive ourselves and others in order to let go of all “old baggage” that holds us back from moving on in our explorations? …a time to dream new dreams or reclaim old ones? What if? Many of today’s elder adults are defying the stereotypes of aging in some remarkable ways. Continued..

To Live in a World without “ISMS.” They are traveling new paths of self-discovery and renewed spirituality, trying out new pursuits, contributing to the welfare of society and the planet through volunteerism, activism in chosen causes, and the creative arts. They are helping to transform society’s view of the “Third Age” as a time of fulfillment, contentment, and new opportunities, the climax of life, rather than of demise. This is the time to change the narrative, to initiate dialogue, and to break free from “isms” that create divisions. Join us in building a movement of unity. Follow us in this issue into some stories of those shattering stereotypes.

Rosemarie never imagined she would be a movie star at age 85. Her starring role as the “Princess of Lichtenstein” in the Bayview film project came as a happy surprise. Rosemarie says when she was younger she never would have had the time as she was busy working and raising a family. Now she loves the freedom that her 85 years bring. Rosemarie says “I would like to continue acting as the Princess of Lichtenstein forever!”

Many people think that age has something to do with the love of the game of chess. Henry turned his attention to chess at the age of 6 years old, proving that age is merely a number! Why does Henry stay so calm under pressure? He says that chess provides him the platform to meditate, to engage good judgment, and to exercise his mental calmness. Look for Henry at the next Bayview Chess competition.

Louise says “it’s crazy. There’s no guidance but it’s the best way to see him every week.” Louise is describing a popular video chat application that she uses called Skype. Louise is dating her high school crush, Jim and because he lives in Montana, Skype has been a helpful tool for both of them to connect. Louise says he was the cutest guy around and conjured up the courage to ask him to the junior prom. Truly an ageless love story.

Allen Hale Allen is perceptive, organized, and energetic. He sees a need, dives into learning more about it, and drives activity to a solution. He has the analytical and creative mind of an engineer as well as the perceptiveness of a psychologist. The perfect double-major Resident Assistant at a dorm? Actually, Allen is an engineer and psychologist. Since moving to Bayview, he’s kept busy working on a wide variety of projects in a number of capacities. Currently, Allen is the Resident Construction Liaison and is relied upon to help facilitate clear communication between the construction crew and Bayview’s residents and management team.

The ukulele appears to be making a comeback. Much of its popularity is because it’s one of the easiest instruments to learn. With just four nylon strings, one can quickly pick up simple chords and play favorite songs in just a few weeks. Enthusiasts include actors Zooey Deschanel and Joseph Gordon-Levitt, and Pearl Jam’s Eddie Vedder who recorded an entire album of ukulele backed songs. Joining them is local student, Marion Watanabe, who says “all it takes is practice, practice, practice.” Cheers to Marion for learning a new instrument!

Originally from Amherst Massachusetts, Tam has been on the West Coast for more than two decades. His westerly adventure began in California. Eventually Tam moved from “The City by the Bay” and found the “Emerald City,” Seattle and a place to call home. While Tam has a spectrum of administrative talents, he finds the collaborative and creative process of songwriting one of his greatest talents. Furthermore, Tam enjoys Theater, Movies and Live Music.

Technology has provided us with all sorts of quicker choices. In turn, daily activity like running or walking are often seen as strictly exercising when in fact it is so much more. Mariko’s motto is to “use it or lose it” and her main mode of transportation is walking. Residents and staff see Mariko walking every day. She embodies the habit of walking with such grace and ease we can’t help but be encouraged to integrate more walking into our daily lives.

Hi! My name is Jill, editor of our Change ‘Age’nt Newsletter. Thank you readers for your latest comments! We are listening!: jchang@bayviewseattle.org

Meet Bayview Chef tamas. Bayview’s French-trained Executive Chef features some serious talent and genius ingredients. With a career that spans across multiple continents and the kitchen at Safeco Field and now to our very own, meet Chef Tamas Ronyai. Earlier this year, Chef Tamas had the honor of catering at the Washington State Governor’s Inaugural Ball in Olympia. The reception was for 2,500 people and required immense amount of preparation from over 300 voluntary chefs and apprentices. Chef Tamas hand-picked his team which included skilled apprentices from Bayview, Melanie Pacheco and Tae Tran, and Elfie Luther from the Art Institute of Seattle. The experience, to say the least, was amazing. Chef Tamas and his team were able to inspire guests to celebrate through good food and company. Bayview is very lucky to have Chef Tamas and his talented team here to influence our daily menu in our dining room. 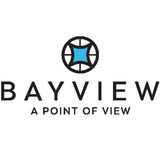