Bay Valves Introducing SuperSat - the valve choice of the Future 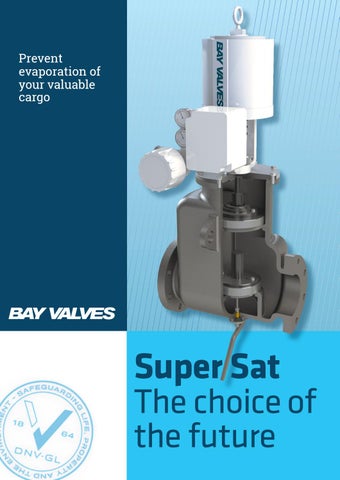 Prevent evaporation of your valuable cargo

Super Sat The choice of the future

The smart valve of the future

Boil-off of cargo that evaporates through p/v valves is increasingly problematic for the industry.

Maintaining a stable high pressure in the tanks keeps the VOC inside the liquid, reducing evaporational loss.

During loading, storage and transportation of oil on cargo ships, Volatile Organic Compounds (VOC) are emitted into the atmosphere, mostly as hydrocarbon gases ranging from methane to heptane. This emission represents a loss of considerable monetary value, but also – equally important – serious consequences for the environment.

VOC are lost in several stages throughout loading and transit, but all is related to the present industry standard of pressure control. When the pressure drops, some of the lighter compounds dissolved in the liquid are released or “flashed”, and some of the compounds that are liquids at the initial pressure/temperature transform into a gas and are also “flashed” from the liquid.

Recently introduced Norwegian legislation has banned the emission of potentially dangerous gases from tankers. Consequently, further legislation to mimic these initiatives around the globe can be expected. Bay Valves has developed the SuperSat VOCON system to ensure both environmental safety, profitability and compliance for enterprises in the future. Considering the concept of SvP (Saturated Vapor Pressure) and the importance of this factor in the development of VOC, it will resonate how the SuperSat is fighting pollution and, furthermore, offering our clients a solution with an attractive return on investment.

Control of the pressure within a crude oil cargo tank vapor system will determine the extent of further vapor evolution. If the pressure within the system is controlled at or above the Saturated Vapor Pressure of the cargo, then equilibrium pressure between the liquid and vapor phases is obtained, and no further VOC will evaporate.

The physics are the same for Flashing and Breathing losses, since VOC emissions occur when a liquid with entrained gases goes from higher pressure to a lower pressure. Keeping the pressure high and stable will eliminate escalated VOC loss on tankers and will, when implemented on FPSOs, reduce the total VOC loss from field to terminal to a fraction.

At high pressure, the VOC are held down and won’t evaporate.

Gas Compounds that are liquids at the initial pressure/ temperature transform from a liquid into a gas/ vapor and are “flashed” from the liquid.

Stop wasting money On a world scale, product losses resulting from VOC emissions are substantial, but can be turned into a gain. A 0.13% loss to evaporation does not sound high, but given the numbers when dealing with cargo ships, the loss becomes substantial. The latest predictions indicate that as much as 9 million tonnes of VOC could be emitted annually due to crude oil transport. This corresponds to about 70 million barrels of light end hydrocarbons representing a value of 3.0 to 3.5 billion USD a year. Breaking it down into individual ships, in a single voyage with a full cargo, the losses amount to more than $40,000 for an Aframax tanker alone. An important part of the equation not included in our calculations is the loss incurred when loading and storing the cargo, which is also reduced by the SuperSat.

SuperSat continuously and without interruptions maintains cargo tank pressure at a high level. Our high velocity valves feature a negative pressure drop as a last resort safety valve, and thus the higher pressure is

achieved without compromising safety. It is essential for VOC containment and thus for the environment and asset value that the cargo tank pressure is maintained high during loading as well as throughout the journey.

WE ARE HERE TO SERVE YOU Should you require more information or wish to discuss any issue related to flow technology in general, cargo tank ventilation, pressurevacuum release and devices to prevent the passage of flames in particular.

Fluctuations in tank pressure increase the instability of the liquid, causing further evaporation. SuperSat maintains the pressure at a steady high, preventing this fluctuation.

Avoiding the Low Vapor pressure area (see graph) by controlling the pressure in the tank contributes to keeping the cargo stable during loading and transportation.

Due diligence in an era of strict environmental requirements is working towards complying with both current and future legislation.

SuperSat is built to meet increasingly strict environmental requirements Recently introduced Norwegian legislation has banned the emission of potentially dangerous gases from tankers. Further legislation to mimic these initiatives around the globe can be expected. There are three types of emissions from hydrocarbon storage tanks. The environmental impact of these emissions is significant as the emitted gas consists of a range of hydrocarbons from methane to higher (typically C6+). Methane is a greenhouse gas with a global warming potential (GWP) of 21 (GWP for CO2 is 1). The non-methane fractions, known as NMVOC, react with nitrous oxides in the presence of sunlight and create a toxic ground level ozone and smog layer,

which has detrimental environmental effects on vegetation and on human health, particularly on the eyes and lungs.

The SuperSat valve is the new industry standard The SuperSat valve is developed and inspired by the Sustainable Development Goals, especially goal number 13 ÂťCombat climate changeÂŤ, as well as recommendations in OCIMF Volatile Organic Compound Emissions from Cargo Systems on Oil Tankers 2019 and ensures both environmental safety, profitability and future legislational compliance for enterprises.

Bay Valves Introducing SuperSat - the valve choice of the Future