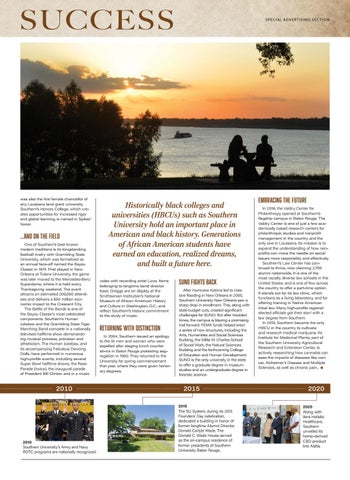 was also the first female chancellor of any Louisiana land grant university. Southern’s Honors College, which creates opportunities for increased rigor and global learning, is named in Spikes’ honor.

…and on the field One of Southern’s best known modern traditions is its longstanding football rivalry with Grambling State University, which was formalized as an annual face-off named the Bayou Classic in 1974. First played in New Orleans at Tulane University, the game was later moved to the Mercedes-Benz Superdome, where it is held every Thanksgiving weekend. The event attracts an estimated 200,000 attendees and delivers a $50 million economic impact to the Crescent City. The Battle of the Bands is one of the Bayou Classic’s most celebrated components. Southern’s Human Jukebox and the Grambling State Tiger Marching Band compete in a nationally televised halftime show demonstrating musical prowess, precision and athleticism. The Human Jukebox, and its accompanying Fabulous Dancing Dolls, have performed in numerous high-profile events, including several Super Bowl halftime shows, the Rose Parade (twice), the inaugural parade of President Bill Clinton and in a music

Historically black colleges and universities (HBCUs) such as Southern University hold an important place in American and black history. Generations of African American students have earned an education, realized dreams, and built a future here. video with recording artist Lizzo. Items belonging to longtime band director Isaac Greggs are on display at the Smithsonian Institution’s National Museum of African American History and Culture in Washington, D.C., and reflect Southern’s historic commitment to the study of music.

Returning with distinction In 2004, Southern issued an apology to the 16 men and women who were expelled after staging lunch counter sit-ins in Baton Rouge protesting segregation in 1960. They returned to the University for spring commencement that year, where they were given honorary degrees.

SUNO fights back After Hurricane Katrina led to massive flooding in New Orleans in 2005, Southern University New Orleans saw a sharp drop in enrollment. This, along with state budget cuts, created significant challenges for SUNO. But after troubled times, the campus is blazing a promising trail forward. FEMA funds helped erect a series of new structures, including the Arts, Humanities and Social Sciences Building, the Millie M. Charles School of Social Work, the Natural Sciences Building and the forthcoming College of Education and Human Development. SUNO is the only university in the state to offer a graduate degree in museum studies and an undergraduate degree in forensic science.

Embracing the future In 2018, the Valdry Center for Philanthropy opened at Southern’s flagship campus in Baton Rouge. The Valdry Center is one of just a few academically based research centers for philanthropic studies and nonprofit management in the country and the only one in Louisiana. Its mission is to expand the understanding of how nonprofits can move the needle on social issues more responsibly and effectively. Southern’s Law Center has continued to thrive, now claiming 2,700 alumni nationwide. It is one of the most racially diverse law schools in the United States, and is one of few across the country to offer a part-time option. It stands out for its law clinic, which functions as a living laboratory, and for offering training in Native American tribal law. Many high-profile regional elected officials got their start with a law degree from Southern. In 2019, Southern became the only HBCU in the country to cultivate and research medical marijuana. Its Institute for Medicinal Plants, part of the Southern University Agricultural Research and Extension Center, is actively researching how cannabis can ease the impacts of diseases like cancer, Alzheimer’s Disease and Multiple Sclerosis, as well as chronic pain..