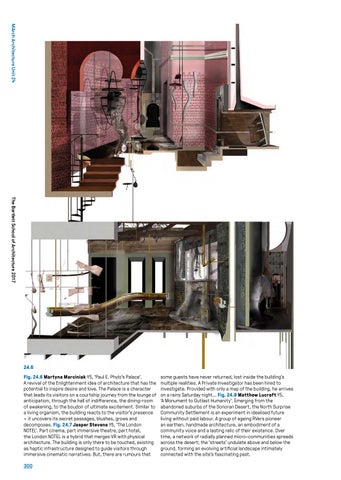 24.6 Fig. 24.6 Martyna Marciniak Y5, ‘Paul E. Phylo’s Palace’. A revival of the Enlightenment idea of architecture that has the potential to inspire desire and love. The Palace is a character that leads its visitors on a courtship journey from the lounge of anticipation, through the hall of indifference, the dining-room of awakening, to the boudoir of ultimate excitement. Similar to a living organism, the building reacts to the visitor’s presence – it uncovers its secret passages, blushes, grows and decomposes. Fig. 24.7 Jasper Stevens Y5, ‘The London NOTEL’. Part cinema, part immersive theatre, part hotel, the London NOTEL is a hybrid that merges VR with physical architecture. The building is only there to be touched, existing as haptic infrastructure designed to guide visitors through immersive cinematic narratives. But, there are rumours that 300

some guests have never returned, lost inside the building’s multiple realities. A Private Investigator has been hired to investigate. Provided with only a map of the building, he arrives on a rainy Saturday night... Fig. 24.8 Matthew Lucraft Y5, ‘A Monument to Outlast Humanity’. Emerging from the abandoned suburbs of the Sonoran Desert, the North Surprise Community Settlement is an experiment in idealised future living without paid labour. A group of ageing RVers pioneer an earthen, handmade architecture, an embodiment of a community voice and a lasting relic of their existence. Over time, a network of radially planned micro-communities spreads across the desert; the ‘streets’ undulate above and below the ground, forming an evolving artificial landscape intimately connected with the site’s fascinating past.

The Bartlett Summer Show Book 2017 is a snapshot of the distinctive and radical work of students at The Bartlett School of Architecture, UCL. The book is a richly illustrated guide to the projects presented at the annual Bartlett Summer Show by students across the school’s professional programmes. It includes selected work from other undergraduate, postgraduate and research programmes, and offers a glimpse of life at one of the world's top architecture schools. 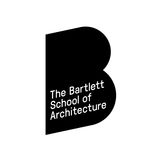 The Bartlett School of Architecture UCL