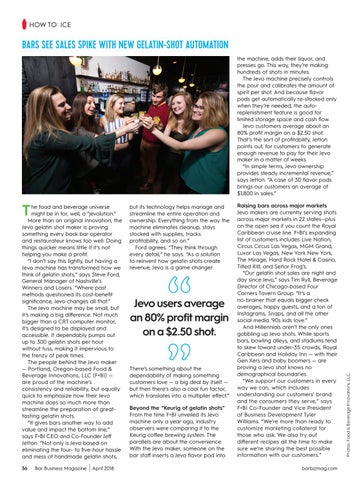 he food and beverage universe might be in for, well, a “jevolution.” More than an original innovation, the Jevo gelatin shot maker is proving something every back bar operator and restaurateur knows too well: Doing things quicker means little if it’s not helping you make a profit. “I don’t say this lightly, but having a Jevo machine has transformed how we think of gelatin shots,” says Steve Ford, General Manager of Nashville’s Winners and Losers. “Where past methods questioned its cost-benefit significance, Jevo changes all that.” The Jevo machine may be small, but it’s making a big difference. Not much bigger than a CRT computer monitor, it’s designed to be displayed and accessible. It dependably pumps out up to 300 gelatin shots per hour without fuss, making it impervious to the frenzy of peak times. The people behind the Jevo maker — Portland, Oregon-based Food & Beverage Innovations, LLC (F+BI) — are proud of the machine’s consistency and reliability, but equally quick to emphasize how their Jevo machine does so much more than streamline the preparation of greattasting gelatin shots. “It gives bars another way to add value and impact the bottom line,” says F+BI CEO and Co-Founder Jeff Jetton. “Not only is Jevo based on eliminating the four- to five-hour hassle and mess of handmade gelatin shots,

but its technology helps manage and streamline the entire operation and ownership. Everything from the way the machine eliminates cleanup, stays stocked with supplies, tracks profitability, and so on.” Ford agrees. “They think through every detail,” he says. “As a solution to reinvent how gelatin shots create revenue, Jevo is a game changer.

Jevo users average an 80% profit margin on a $2.50 shot. There’s something about the dependability of making something customers love — a big deal by itself — but then there’s also a cool fun factor, which translates into a multiplier effect.” Beyond the “Keurig of gelatin shots” From the time F+BI unveiled its Jevo machine only a year ago, industry observers were comparing it to the Keurig coffee brewing system. The parallels are about the convenience. With the Jevo maker, someone on the bar staff inserts a Jevo flavor pod into

Raising bars across major markets Jevo makers are currently serving shots across major markets in 22 states—plus on the open sea if you count the Royal Caribbean cruise line. F+BI’s expanding list of customers includes Live Nation, Circus Circus Las Vegas, MGM Grand, Luxor Las Vegas, New York New York, The Mirage, Hard Rock Hotel & Casino, Tilted Kilt, and Señor Frog’s. “Our gelatin shot sales are night and day since Jevo,” says Tim Ryll, Beverage Director of Chicago-based Four Corners Tavern Group. “It’s a no-brainer that equals bigger check averages, happy guests, and a ton of Instagrams, Snaps, and all the other social media ‘90s kids love.” And Millennials aren’t the only ones gobbling up Jevo shots. While sports bars, bowling alleys, and stadiums tend to skew toward under-35 crowds, Royal Caribbean and Holiday Inn — with their Gen Xers and baby boomers — are proving a Jevo shot knows no demographical boundaries. “We support our customers in every way we can, which includes understanding our customers’ brand and the consumers they serve,” says F+BI Co-Founder and Vice President of Business Development Tyler Williams. “We’re more than ready to customize marketing collateral for those who ask. We also try out different recipes all the time to make sure we’re sharing the best possible information with our customers.”

the machine, adds their liquor, and presses go. This way, they’re making hundreds of shots in minutes. The Jevo machine precisely controls the pour and calibrates the amount of spirit per shot. And because flavor pods get automatically re-stocked only when they’re needed, the autoreplenishment feature is good for limited storage space and cash flow. Jevo customers average about an 80% profit margin on a $2.50 shot. That’s the sort of profitability, Jetton points out, for customers to generate enough revenue to pay for their Jevo maker in a matter of weeks. “In simple terms, Jevo ownership provides steady incremental revenue,” says Jetton. “A case of 30 flavor pods brings our customers an average of $1,800 in sales.” 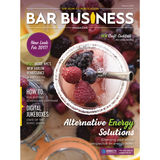