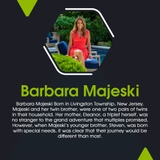 Barbara Majeski was born in Livingston Township, New Jersey. She and her twin brother were one of two pairs of twins in their household. Her mother, Eleanor, a triplet herself, was no stranger to the grand adventure that multiples promised. However, when Majeski's younger brother, Steven, was born with special needs, it was clear that their journey would be different than most. Majeski has always been fiercely protective of her family--especially her brother Steven. She has spent her life advocating for him and others like him, and she is committed to making sure that everyone is treated with the respect they deserve.