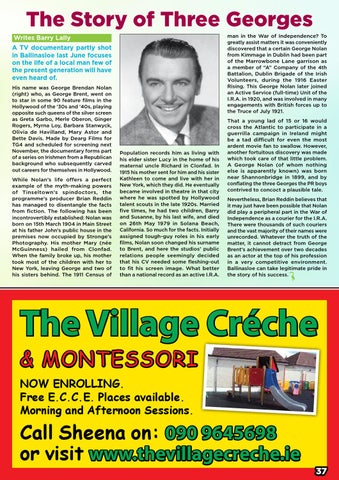 The Story of Three Georges

man in the War of Independence? To greatly assist matters it was conveniently discovered that a certain George Nolan from Kimmage in Dublin had been part of the Marrowbone Lane garrison as a member of “A” Company of the 4th Battalion, Dublin Brigade of the Irish Volunteers, during the 1916 Easter Rising. This George Nolan later joined an Active Service (full-time) Unit of the I.R.A. in 1920, and was involved in many engagements with British forces up to the Truce of July 1921.

Writes Barry Lally A TV documentary partly shot in Ballinasloe last June focuses on the life of a local man few of the present generation will have even heard of. His name was George Brendan Nolan (right) who, as George Brent, went on to star in some 90 feature films in the Hollywood of the ‘30s and ‘40s, playing opposite such queens of the silver screen as Greta Garbo, Merle Oberon, Ginger Rogers, Myrna Loy, Barbara Stanwyck, Olivia de Havilland, Mary Astor and Bette Davis. Made by Dearg Films for TG4 and scheduled for screening next November, the documentary forms part of a series on Irishmen from a Republican background who subsequently carved out careers for themselves in Hollywood. While Nolan’s life offers a perfect example of the myth-making powers of Tinseltown’s spindoctors, the programme’s producer Brian Reddin has managed to disentangle the facts from fiction. The following has been incontrovertibly established: Nolan was born on 15th March 1904 in Main Street at his father John’s public house in the premises now occupied by Stronge’s Photography. His mother Mary (née McGuinness) hailed from Clonfad. When the family broke up, his mother took most of the children with her to New York, leaving George and two of his sisters behind. The 1911 Census of

Population records him as living with his elder sister Lucy in the home of his maternal uncle Richard in Clonfad. In 1915 his mother sent for him and his sister Kathleen to come and live with her in New York, which they did. He eventually became involved in theatre in that city where he was spotted by Hollywood talent scouts in the late 1920s. Married five times, he had two children, Barry and Susanne, by his last wife, and died on 26th May 1979 in Solana Beach, California. So much for the facts. Initially assigned tough-guy roles in his early films, Nolan soon changed his surname to Brent, and here the studios’ public relations people seemingly decided that his CV needed some fleshing-out to fit his screen image. What better than a national record as an active I.R.A.

That a young lad of 15 or 16 would cross the Atlantic to participate in a guerrilla campaign in Ireland might be a tad difficult for even the most ardent movie fan to swallow. However, another fortuitous discovery was made which took care of that little problem. A George Nolan (of whom nothing else is apparently known) was born near Shannonbridge in 1899, and by conflating the three Georges the PR boys contrived to concoct a plausible tale. Nevertheless, Brian Reddin believes that it may just have been possible that Nolan did play a peripheral part in the War of Independence as a courier for the I.R.A. There were thousands of such couriers and the vast majority of their names were unrecorded. Whatever the truth of the matter, it cannot detract from George Brent’s achievement over two decades as an actor at the top of his profession in a very competitive environment. Ballinasloe can take legitimate pride in the story of his success. 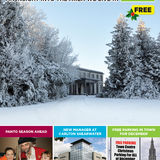