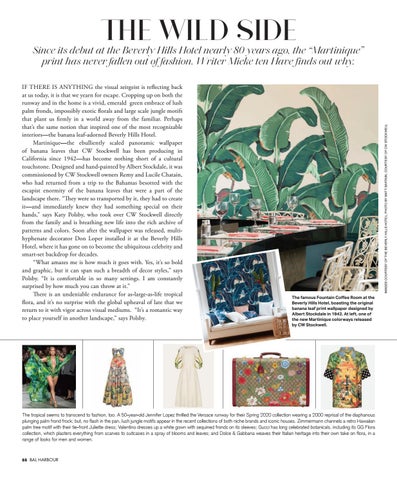 IF THERE IS ANYTHING the visual zeitgeist is reflecting back at us today, it is that we yearn for escape. Cropping up on both the runway and in the home is a vivid, emerald green embrace of lush palm fronds, impossibly exotic florals and large scale jungle motifs that plant us firmly in a world away from the familiar. Perhaps that’s the same notion that inspired one of the most recognizable interiors—the banana leaf-adorned Beverly Hills Hotel. Martinique—the ebulliently scaled panoramic wallpaper of banana leaves that CW Stockwell has been producing in California since 1942—has become nothing short of a cultural touchstone. Designed and hand-painted by Albert Stockdale, it was commissioned by CW Stockwell owners Remy and Lucile Chatain, who had returned from a trip to the Bahamas besotted with the escapist enormity of the banana leaves that were a part of the landscape there. “They were so transported by it, they had to create it—and immediately knew they had something special on their hands,” says Katy Polsby, who took over CW Stockwell directly from the family and is breathing new life into the rich archive of patterns and colors. Soon after the wallpaper was released, multihyphenate decorator Don Loper installed it at the Beverly Hills Hotel, where it has gone on to become the ubiquitous celebrity and smart-set backdrop for decades. “What amazes me is how much it goes with. Yes, it’s so bold and graphic, but it can span such a breadth of decor styles,” says Polsby. “It is comfortable in so many settings. I am constantly surprised by how much you can throw at it.” There is an undeniable endurance for as-large-as-life tropical flora, and it’s no surprise with the global upheaval of late that we return to it with vigor across visual mediums. “It’s a romantic way to place yourself in another landscape,” says Polsby.

Since its debut at the Beverly Hills Hotel nearly 80 years ago, the “Martinique” print has never fallen out of fashion. Writer Mieke ten Have finds out why.

The famous Fountain Coffee Room at the Beverly Hills Hotel, boasting the original banana leaf print wallpaper designed by Albert Stockdale in 1942. At left, one of the new Martinique colorways released by CW Stockwell.

The tropical seems to transcend to fashion, too. A 50-year-old Jennifer Lopez thrilled the Versace runway for their Spring 2020 collection wearing a 2000 reprisal of the diaphanous plunging palm frond frock; but, no flash in the pan, lush jungle motifs appear in the recent collections of both niche brands and iconic houses. Zimmermann channels a retro Hawaiian palm tree motif with their tie-front Juliette dress; Valentino dresses up a white gown with sequined fronds on its sleeves; Gucci has long celebrated botanicals, including its GG Flora collection, which plasters everything from scarves to suitcases in a spray of blooms and leaves; and Dolce & Gabbana weaves their Italian heritage into their own take on flora, in a range of looks for men and women. 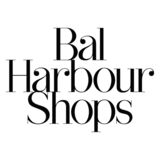 Stay connected to the world of fashion, style and beauty with the Bal Harbour magazine Fall 2020 issue! Please visit https://www.balharbour...

Stay connected to the world of fashion, style and beauty with the Bal Harbour magazine Fall 2020 issue! Please visit https://www.balharbour...