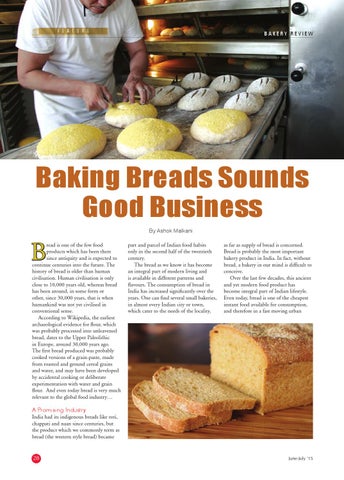 read is one of the few food products which has been there since antiquity and is expected to continue centuries into the future. The history of bread is older than human civilisation. Human civilisation is only close to 10,000 years old, whereas bread has been around, in some form or other, since 30,000 years, that is when humankind was not yet civilised in conventional sense. According to Wikipedia, the earliest archaeological evidence for flour, which was probably processed into unleavened bread, dates to the Upper Paleolithic in Europe, around 30,000 years ago. The first bread produced was probably cooked versions of a grain-paste, made from roasted and ground cereal grains and water, and may have been developed by accidental cooking or deliberate experimentation with water and grain flour.Â And even today bread is very much relevant to the global food industryâ&amp;#x20AC;Ś

part and parcel of Indian food habits only in the second half of the twentieth century. The bread as we know it has become an integral part of modern living and is available in different patterns and flavours. The consumption of bread in India has increased significantly over the years. One can find several small bakeries, in almost every Indian city or town, which cater to the needs of the locality,

as far as supply of bread is concerned. Bread is probably the most important bakery product in India. In fact, without bread, a bakery in our mind is difficult to conceive. Over the last few decades, this ancient and yet modern food product has become integral part of Indian lifestyle. Even today, bread is one of the cheapest instant food available for consumption, and therefore in a fast moving urban

A Promising Industry India had its indigenous breads like roti, chappati and naan since centuries, but the product which we commonly term as bread (the western style bread) became

Here we have covered the different aspects of the growing trend towards healthy bakery products, which have been experienced in the Indian bakery industry for quite some years. The promising burger market in India is being explored through our Business Story. The potential of India’s bread making industry, factors to take into account while undertaking bread production and its marketing, and the evolving trends in the Indian bread industry are also being discussed briefly in our Feature section. The safety measures in bakery operations, and the attributes of saffron, an ingredient which has applications in bakery production, are also being covered. 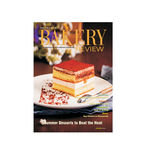