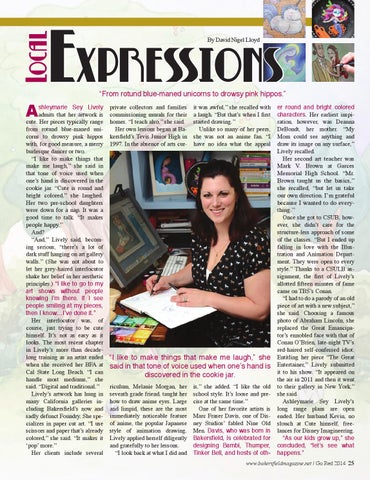 shleymarie Sey Lively admits that her artwork is cute. Her pieces typically range from rotund blue-maned unicorns to drowsy pink hippos with, for good measure, a merry burlesque dancer or two. “I like to make things that make me laugh,” she said in that tone of voice used when one’s hand is discovered in the cookie jar. “Cute is round and bright colored,” she laughed. Her two pre-school daughters were down for a nap. It was a good time to talk. “It makes people happy.” And? “And,” Lively said, becoming serious, “there’s a lot of dark stuff hanging on art gallery walls.” (She was not about to let her grey-haired interlocutor shake her belief in her aesthetic principles.) “I like to go to my art shows without people knowing I’m there. If I see people smiling at my pieces, then I know…I’ve done it.” Her interlocutor was, of course, just trying to be cute himself. It’s not as easy as it looks. The most recent chapter in Lively’s more than decadelong training as an artist ended when she received her BFA at Cal State Long Beach. “I can handle most mediums,” she said. “Digital and traditional.” Lively’s artwork has hung in many California galleries including Bakersfield’s now and sadly defunct Foundry. She specializes in paper cut art. “I use scissors and paper that’s already colored,” she said. “It makes it ‘pop’ more.” Her clients include several

private collectors and families commissioning murals for their homes. “I teach also,” she said. Her own lessons began at Bakersfield’s Tevis Junior High in 1997. In the absence of arts cur-

it was awful,” she recalled with a laugh. “But that’s when I first started drawing.” Unlike so many of her peers, she was not an anime fan. “I have no idea what the appeal

“I like to make things that make me laugh,” she said in that tone of voice used when one’s hand is discovered in the cookie jar. riculum, Melanie Morgan, her seventh grade friend, taught her how to draw anime eyes. Large and limpid, these are the most immediately noticeable feature of anime, the popular Japanese style of animation drawing. Lively applied herself diligently and gratefully to her lessons. “I look back at what I did and

is,” she added. “I like the old school style. It’s loose and precise at the same time.” One of her favorite artists is Marc Fraser Davis, one of Disney Studios’ fabled Nine Old Men. Davis, who was born in Bakersfield, is celebrated for designing Bambi, Thumper, Tinker Bell, and hosts of oth-

er round and bright colored characters. Her earliest inspiration, however, was Deanna DeBondt, her mother. “My Mom could see anything and draw its image on any surface,” Lively recalled. Her second art teacher was Mark V. Brown at Garces Memorial High School. “Mr. Brown taught us the basics,” she recalled, “but let us take our own direction. I’m grateful because I wanted to do everything.” Once she got to CSUB, however, she didn’t care for the structure-less approach of some of the classes. “But I ended up falling in love with the Illustration and Animation Department. They were open to every style.” Thanks to a CSULB assignment, the first of Lively’s allotted fifteen minutes of fame came on TBS’s Conan. “I had to do a parody of an old piece of art with a new subject,” she said. Choosing a famous photo of Abraham Lincoln, she replaced the Great Emancipator’s ennobled face with that of Conan O’Brien, late-night TV’s red-haired self-confessed idiot. Entitling her piece “The Great Entertainer,” Lively submitted it to his show. “It appeared on the air in 2011 and then it went to their gallery in New York,” she said. Ashleymarie Sey Lively’s long range plans are open ended. Her husband Kevin, no slouch at Cute himself, freelances for Disney Imagineering. “As our kids grow up,” she concluded, “let’s see what happens.”