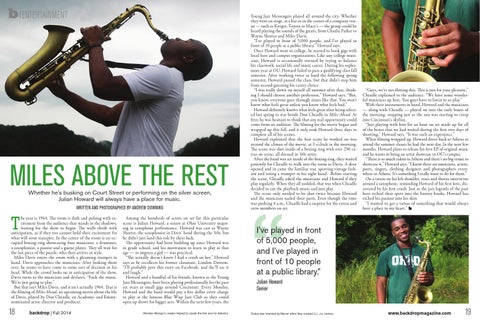 MILES ABOVE THE REST Whether he’s busking on Court Street or performing on the silver screen, Julian Howard will always have a place for music. WRITTEN AND PHOTOGRAPHED BY ANDREW DOWNING

he year is 1964. The room is dark and pulsing with excitement from the audience that stands in the shadows, waiting for the show to begin. The walls throb with anticipation, as if they too cannot hold their excitement for what will soon transpire. In the center of the room is an occupied boxing ring showcasing four musicians: a drummer, a saxophonist, a pianist and a guitar player. They all wait for the last piece of the puzzle, who then arrives in style. Miles Davis enters the room with a gleaming trumpet in hand. Davis approaches the musicians. After looking them over, he seems to have come to some sort of decision in his head. While the crowd looks on in anticipation of the show, Davis turns to the musicians and declares, “Fuck the music. We’re just going to play.” But that isn’t Miles Davis, and it isn’t actually 1964. That is the filming of Miles Ahead, an upcoming movie about the life of Davis, played by Don Cheadle, an Academy- and Emmynominated actor, director and producer.

Among the hundreds of actors on set for this particular scene is Julian Howard, a senior at Ohio University majoring in saxophone performance. Howard was cast as Wayne Shorter, the saxophonist in Davis’ band during the ’60s, but he didn’t just land this role by sheer luck. The opportunity had been building up since Howard was in grade school, and his motivation to learn to play at that age — to impress a girl — was practical. “She actually doesn’t know I had a crush on her,” Howard says as he recollects his former classmate, London Dawson. “I’ll probably post this story on Facebook, and she’ll see it and laugh.” Howard and a handful of his friends, known as the Young Jazz Messengers, have been playing professionally for the past six years at small gigs around Cincinnati. Every Monday, Howard and the band would pay a five dollar cover charge to play at the famous Blue Wisp Jazz Club so they could open up shows for bigger acts. Within the next few years, the Wonder Woman’s creator helped to create the first ever lie detector.

Young Jazz Messengers played all around the city. Whether they were on stage, at a bar or in the corner of a company venue — such as Kroger, Toyota or Macy’s — the group could be heard playing the sounds of the greats, from Charlie Parker to Wayne Shorter and Miles Davis. “I’ve played in front of 5,000 people, and I’ve played in front of 10 people at a public library,” Howard says. Once Howard went to college, he started to book gigs with local bars and campus organizations. Like any college musician, Howard is occasionally stressed by trying to balance his classwork, social life and music career. During his sophomore year at OU, Howard failed to pass a qualifying class fall semester. After working twice as hard the following spring semester, Howard passed the class, but that didn’t stop him from second-guessing his career choice. “I was really down on myself all summer after that, thinking I should choose another profession,” Howard says. “But, you know, everyone goes through times like that. You won’t know what feels great unless you know what feels bad.” Howard definitely knows what feels great after being selected last spring to star beside Don Cheadle in Miles Ahead. At first, he was hesitant to think that any real opportunity could come from an audition. The filming for the movie began and wrapped up this fall, and it only took Howard three days to complete all of his scenes. Howard explained that the first scene he worked on was around the climax of the movie, at 3 o’clock in the morning. The scene was shot inside of a boxing ring with over 250 extras on scene, all dressed in ’60s attire. After the band was set inside of the boxing ring, they waited patiently for Cheadle to walk into the room as Davis. A door opened and in came the familiar star, sporting vintage fashion and toting a trumpet in his right hand. Before starting the scene, Cheadle asked the musicians and Howard if they play regularly. When they all nodded, that was when Cheadle decided to cut the playback music and just play. The scene only needed to be shot twice because Howard and the musicians nailed their parts. Even though the time was pushing 4 a.m., Cheadle had a surprise for the extras and crew members on set.

“Guys, we’re not filming this. This is just for your pleasure,” Cheadle explained to the audience. “We have some wonderful musicians up here. You guys have to listen to us play.” With their instruments in hand, Howard and the musicians — along with Cheadle — played on into the early hours of the morning, stopping just as the sun was starting to creep into Cincinnati’s skyline. “Just playing with him for an hour on set made up for all of the hours that we had waited during the first two days of shooting,” Howard says. “It was such an experience.” When filming wrapped up, Howard drove back to Athens to attend the summer classes he had the next day. In the next few months, Howard plans to release his first EP of original music and he wants to bring an artist showcase to OU’s campus. “There is so much talent in Athens and there’s no big venue to showcase it,” Howard says. “I know there are musicians, artists, poets, singers, clothing designers and photographers everywhere in Athens. It’s something I really want to do for them.” On a tattoo on his left shoulder, roses and thorns intertwine around a saxophone, reminding Howard of his first love, discovered by his first crush. Just as the jazz legends of the past have etched their spots into the history books, Howard has etched his passion into his skin. “I wanted to get a tattoo of something that would always have a place in my heart.”

Cobra was invented by Marvel when they created G.I. Joe comics.

Drawn Together: Read about four local comic artists and their struggle to stay relevant in the digital age. 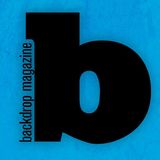