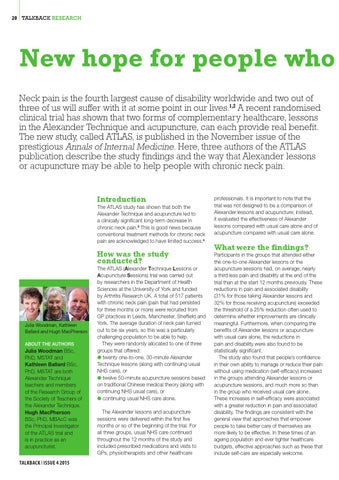 New hope for people who Neck pain is the fourth largest cause of disability worldwide and two out of three of us will suffer with it at some point in our lives.1,2 A recent randomised clinical trial has shown that two forms of complementary healthcare, lessons in the Alexander Technique and acupuncture, can each provide real benefit. The new study, called ATLAS, is published in the November issue of the prestigious Annals of Internal Medicine. Here, three authors of the ATLAS publication describe the study findings and the way that Alexander lessons or acupuncture may be able to help people with chronic neck pain.

The ATLAS study has shown that both the Alexander Technique and acupuncture led to a clinically significant long-term decrease in chronic neck pain.3 This is good news because conventional treatment methods for chronic neck pain are acknowledged to have limited success.4

How was the study conducted?

Julia Woodman, Kathleen Ballard and Hugh MacPherson ABOUT THE AUTHORS

The ATLAS (Alexander Technique Lessons or Acupuncture Sessions) trial was carried out by researchers in the Department of Health Sciences at the University of York and funded by Arthritis Research UK. A total of 517 patients with chronic neck pain (pain that had persisted for three months or more) were recruited from GP practices in Leeds, Manchester, Sheffield and York. The average duration of neck pain turned out to be six years, so this was a particularly challenging population to be able to help. They were randomly allocated to one of three groups that offered: l twenty one-to-one, 30-minute Alexander Technique lessons (along with continuing usual NHS care), or l twelve 50-minute acupuncture sessions based on traditional Chinese medical theory (along with continuing NHS usual care), or l continuing usual NHS care alone. The Alexander lessons and acupuncture sessions were delivered within the first five months or so of the beginning of the trial. For all three groups, usual NHS care continued throughout the 12 months of the study and included prescribed medications and visits to GPs, physiotherapists and other healthcare

What were the findings?

Participants in the groups that attended either the one-to-one Alexander lessons or the acupuncture sessions had, on average, nearly a third less pain and disability at the end of the trial than at the start 12 months previously. These reductions in pain and associated disability (31% for those taking Alexander lessons and 32% for those receiving acupuncture) exceeded the threshold of a 25% reduction often used to determine whether improvements are clinically meaningful. Furthermore, when comparing the benefits of Alexander lessons or acupuncture with usual care alone, the reductions in pain and disability were also found to be statistically significant. The study also found that peopleâ&#x20AC;&#x2122;s confidence in their own ability to manage or reduce their pain without using medication (self-efficacy) increased in the groups attending Alexander lessons or acupuncture sessions, and much more so than in the group who received usual care alone. These increases in self-efficacy were associated with a greater reduction in pain and associated disability. The findings are consistent with the general view that approaches that empower people to take better care of themselves are more likely to be effective. In these times of an ageing population and ever tighter healthcare budgets, effective approaches such as these that include self-care are especially welcome. 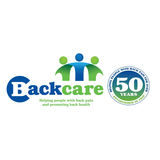