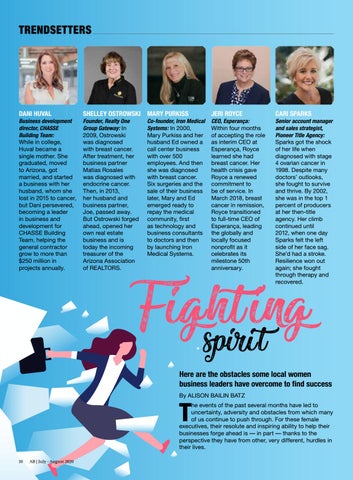 Business development director, CHASSE Building Team: While in college, Huval became a single mother. She graduated, moved to Arizona, got married, and started a business with her husband, whom she lost in 2015 to cancer, but Dani persevered, becoming a leader in business and development for CHASSE Building Team, helping the general contractor grow to more than $250 million in projects annually.

SHELLEY OSTROWSKI MARY PURKISS Founder, Realty One Group Gateway: In 2009, Ostrowski was diagnosed with breast cancer. After treatment, her business partner Matias Rosales was diagnosed with endocrine cancer. Then, in 2013, her husband and business partner, Joe, passed away. But Ostrowski forged ahead, opened her own real estate business and is today the incoming treasurer of the Arizona Association of REALTORS.

Co-founder, Iron Medical Systems: In 2000, Mary Purkiss and her husband Ed owned a call center business with over 500 employees. And then she was diagnosed with breast cancer. Six surgeries and the sale of their business later, Mary and Ed emerged ready to repay the medical community, first as technology and business consultants to doctors and then by launching Iron Medical Systems.

CEO, Esperança: Within four months of accepting the role as interim CEO at Esperança, Royce learned she had breast cancer. Her health crisis gave Royce a renewed commitment to be of service. In March 2018, breast cancer in remission, Royce transitioned to full-time CEO of Esperança, leading the globally and locally focused nonprofit as it celebrates its milestone 50th anniversary.

Senior account manager and sales strategist, Pioneer Title Agency: Sparks got the shock of her life when diagnosed with stage 4 ovarian cancer in 1998. Despite many doctors’ outlooks, she fought to survive and thrive. By 2002, she was in the top 1 percent of producers at her then-title agency. Her climb continued until 2012, when one day Sparks felt the left side of her face sag. She’d had a stroke. Resilience won out again; she fought through therapy and recovered.

he events of the past several months have led to uncertainty, adversity and obstacles from which many of us continue to push through. For these female executives, their resolute and inspiring ability to help their businesses forge ahead is — in part — thanks to the perspective they have from other, very different, hurdles in their lives.

We are honored to showcase the Most Influential Women in Arizona. Enjoy this issue.

We are honored to showcase the Most Influential Women in Arizona. Enjoy this issue.