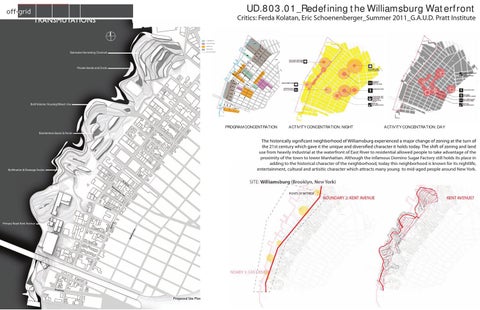 use from heavily industrial at the waterfront of East River to residential allowed people to take advantage of the proximity of the town to lower Manhattan. Although the infamous Domino Sugar Factory still holds its place in adding to the historical character of the neighborhood, today this neighborhood is known for its nightlife, entertainment, cultural and artisitic character which attracts many young to mid-aged people around New York.

â&#x20AC;&#x153;Off-Grid Transmationsâ&#x20AC;? is a proposal apt for Willaimsburg, a place that stands out from its adjacent neighborhoods because of its shift from a mundane lifestyle to a highly unconventional and vibrant one. The proposal emphasizes the visual proximity to the Manhattan skyline by inviting residents to live on the waterâ&#x20AC;&#x2122;s edge. The form of the landscape is continuous, stretching almost the entire length of Kent Avenue, the one way street that is is parallel to the waterfront within the boundaries of the neighborhood.

The landscape wraps around the sugar factory as a skateboard park, continues north to incorporate existing parks (Grand Ferry Park, East River State Park) and meanders in between proposed residential buildings in the northern half of the site. The multifaceted character of the landscape allows it to serve as a continuous open public park space as well as a rain-water collection, filtration and harvesting system above and underground. Various sized proposed buildings on the waterfront allow for multi-use and occupancy of space, whether it be residential, commercial, civic or recreational. The shifting and organic edge of the water from a completely rigid and disconnected one allows for water-based activities, docking, sailing and even swimming in the future. The phasing of the project is based on the growing needs of the neighborhood and expected increase in population as more and more people move out of expensive Manhattan lofts to this comparatively affordable neighborhood offering a short commute to the city, a breathtaking view of lower Manhattan and a very similar lifestyle that highly encourages individual expression and growth.

The CLOUD studio places emphasis on the relationship between architecture and event on a national/international level; a careful study of material tectonics allows for a comprehensive design which speculates on the effect of architecture and assembly/disassembly of the event. Environmental qualities of a tectonselected site impact aspects such as programmatic conditions, form, structure and ultimately material tecton ics of the architecture that serves the event in a given timeframe. International events such as the Olympics, World Cup, World Expositions and other such events serve as precedent studies and can be selected for investigation in any given location and time period in the future.

During the precedent analysis phase, I teamed up with two students to study the major World Expositions over the course of the past century. In particular we looked at the Paris Exposition of 1889, Montreal Exposition of 1967 and the Shanghai Exposition of 2010. An in-depth study of the world expositions led to the conclusion that overtime there is an evident shift of World Expo location from the West to the East. The proposal for CLOUD studio is focused on the international event of ‘Ramadan’ taking place in a global city from the eastern hemisphere, particularly in the U.A.E. region called Abu Dhabi.

With its seemingly infinite resource of natural gas and oil, Abu Dhabi has prospered significantly in the world since the past fifty years. Today this global city has a rising industry in most fields, a diversified economy, an improved eduation and health reform system and a grand proposal that will bring the city to an international level known as ‘Vision 2030.’ The CLOUD intervention takes place in the time frame of 2015 - 2030, then continues in the years to follow. Upon the annual arrival of the holy month of “Ramadan” Muslims from all over the world obtain fasting from sunrise to sunset. The city of Abu Dhabi, like most other Muslim cities actively participates in this event, influencing the daily lives and activities of working men and women as well as children within the city. The intervention would take advantage of the 30 day period during which the holy month is observed and propose a grand event celebrating Eid, a global holiday which marks the end of Ramadan within “Event Containers.” These are used to hold daily art,cultural and entertainment activities containduring Ramadan then converted into much-needed affordable housing units post-event. The “event contain ers” are made by using a rigid, seemingly spontaneous but an underlying organization system that serves as scaffolding for pre-fabriated panels that can be disassembled or re-arranged after the event to be converted to affordable housing units as needed by the city.

There is a strong underlying organization system that is embedded within the seemingly spontaneous development of the “event container” units which guides the way in which the units expand over time. The structural organization is inspired by the reversible nature of the penrose patterns and is taken directly from one of such patterns. The organization system per “Event container” exactly repeats itself while producing volumes that respond directly to social conditions, needs and the shifting demand of Emirati population. In this process, the units change in morphology in various ways while being based off the same structural organization grid. Over the time period of two decades, this scaffolding-based system of pre-fabricated material becomes an essential part of the architectural expansion of the “event containers.” The material tectonics allow for flexibility to serve the need of the event and the expected growing population of the city of Abu Dhabi. Furthermore, the architectural technique allows for horizontal as well as vertical expansion and the chosen material tectonics support the expansion in both directions while enhancing the experience of the user through its formal qualities. The formal characteristics of the architecture allow for a new language to develop across Abu Dhabi which can be prototypical of elsewhere within the region. An expansion in the affordable housing units allows for an overall stronger economy of the city by inviting more people to live and work in closer proximity to the city center.

It is year 2100; the coastal peripheries have shrunk and penetrated the mainland. Miami now remains 30 percent land. This is exacerbated by a recent radiation leak along the coastal line. New mutants termed as the aqua men or the 'mermen' quickly gain dominance over Miami. Due to their claim that a scientific research project being allegedly conducted by them will largely benefit the citizens of Miami and allow them to attain amphibious characteristics essential for survival. Whereas some people of Miami still decide to adapt to the extreme realities of their city instead of abandoning it. Land becomes precious and dry dirt expensive. They knew that for survival they needed to define a new datum and new ground. In a scenario like this they manage to build certain mounds for survival purposes but those are soon overcome with population of the living. Thus they turn to architecture; deliberated robust and buoyant. They adopt new means of transportation. Engineering of every technology is modified. New concepts of recreation. It could be a combination of transportation and habitation. Some people can afford land. Some stick to mounds. Some are detachable and attachable to the city. The research labs are buoyant. Parallel landscapes; machine like; floating above water and below water are reflective of the character of an aqua men. The synthetic landscapes generates a sense of belonging.

The project imagines a scenario responding to a radical (but seemingly inevitable) rise in water level across Miami. The urbanism emerging from this catastrophe is understood to be a â&#x20AC;&#x2DC;new normalâ&#x20AC;&#x2122; that will eventually emerge. To the eyes of the present, this speculative urbanism may seem to be an uncomfortable cohabitation with pervasive technologies constituting alternative modes of human survival. The paranoia about the disappearance of a stable ground is explored by asserting the idea that a new datum will emerge along with new aesthetic judgments about what it means to live in a city.

This small-scale project based in Long Island, New York is a new one-story addition to an existing two-story commercial building for use as future office/retail spaces. The project is considered as a planning proposal as well due to the revision of parking layout on the site. I was responsible for field measuring, schematic design all the way through design development and construction documentation for the project with guidance from the architect.

The building is to be renovated from the interior and structure is to be revised to accommodate new addition and canopy. Existing building is also to be renovated and the facade consists of a combination of stucco on existing exterior walls and paneling system/glass storefront system on the new addition. The proposed one-story addition is to act as a grand lobby with staircase leading to the second floor providing a seperate entrance for a potential tenant on the upper level. Besides the design of the building, there was an intent to consider & revise the layout of the entire lot as the new addition adds to the minimum required parking.

Renovation of one-story building into a commercial storefront on the intersection of Queens boulevard in Queens, New York. The facade selected for the building was chosen as a combination of an aluminum pre-fabricated panel system and stucco. The construction drawings were made to be specific of designating and indicating where the panels would be placed and which side of the facade would have stucco as wall material. The elevations were also to be informative of facade coloring (yellow/black as per the clientâ&#x20AC;&#x2122;s requirement) sizing, grade change and window/door openings.

This four-story multiple use building in Brooklyn is used as a pastry shop at the ground level and residential units above. The pastry shop, having been around for over 50 years, is a great asset to the Brooklyn neighborhood and the scope of the project required the building to preserved. I aided in the field measurement of the building in order to develop floor plans and elevations to indicate existing conditions of the structure. In the next phase, the drawings were developed further to indicate areas of repair and reconstruction on the exterior and interior of the building. In addition, the building is considered a â&#x20AC;&#x153;landmarkâ&#x20AC;? according to New York City Zoning, therefore every repair on the building including rebuilding specific areas,painting, spalling the stone or brick, and lintel repair were all taken into serious consideration and materials selected and suggested with high level of caution. The portflio showcases graduate work done at Pratt Institute (2011-12) for architecture/urban design in addition to commercial work done by...

The portflio showcases graduate work done at Pratt Institute (2011-12) for architecture/urban design in addition to commercial work done by...