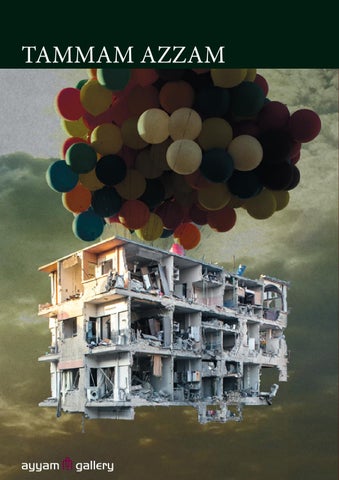 Syrian artist Tammam Azzam experiments in the application of various media. For Azzam, such a methodology facilitates the creation of an artwork as a “hybrid form”, one that is capable of borrowing and multiplying as it evolves. His recent works employ digital media and street art references to examine the ongoing political and social upheaval in Syria and the cycles of violence and destruction tearing his country apart. Azzam cleverly reconfigures iconic symbols into poignant reflections of the turmoil facing his countrymen and the neglect of the world to their plight.

I, the Syrian by Alicia Hughes “I, the Syrian”, is Tamman Azzam’s statement of artistic purpose; he is an artist whose practice is inextricably linked to his nationality and upon seeing his fractured and wounded maps of Syria, hand grenades sprouting flowers, and symbols of nature fashioned through blood splatter, one can easily understand why. “People will endlessly debate the secret within the Mona Lisa’s eyes yet there is an urgent secret within Syria that needs more attention.” Disbelief echoes in Tamman Azzam’s voice as he considers the Syrian Museum series that propelled him to international attention earlier this year after his work Freedom Graffiti went viral through social media and press outlets across the world. Incorporating iconic subjects from the greatest European masters such as da Vinci, Matisse, Goya and Picasso into photographs of present-day Syria, this series places these beloved masterpieces in a war-torn 21st century landscape. Although these works first appear out of context, it becomes readily apparent to the viewer that these paintings address timeless subjects relevant in Syria today. Goya’s The Third of May 1808 is overlaid upon a crumbling street scene in Damascus, paralleling the two atrocities and elucidating that mankind will continue to embroil itself in an endless cycle of violence. Gustav Klimt’s The Kiss is superimposed atop the facade of a bulletridden, crumbling building as though it is street art. Through the building’s gapping holes, the remnants of homes that once held memories, friendships and love stories are visible. Yet Azzam is quick to reiterate that Klimt’s often-misunderstood painting is not a depiction of a romantic relationship, but rather an embrace that represents a universal love between mankind in its entirety.

By veneering the façade of this war-torn Damascene building with this existential truth, Azzam expresses his hope that a universal love for humanity will prevail and peace will be achieved in his homeland. Further utilising the universal accessibility of street art, his recent digital artworks Exit and Syrian Olympic envision a future Syria in which street art is not propagandized, but employed by the masses as a form of protest and expression, for or against a functioning democratic government. Using the stenciling method of graffiti on concrete-rendered surfaces, Exit and Syrian Olympic confront the viewer in black and grey terms. Azzam simplifies his narrative by using utilitarian stickmen without any distinguishing features; beyond nationality, the characters of his story are human above all else. In Exit, a formation of armed soldiers face the viewer while a figure, identical despite his lack of arms, buckles under the weight of a rucksack as he walks towards to the edge of the canvas, as if removing himself from the picture plane. Syrian Olympic depicts these same utilitarian stickmen engaged in the competitive sports of shooting and sprinting under the iconic interlocking Olympic rings. The dark humour of this work fades almost immediately into the stark reality of the mass exodus of Syrian refugees in the face of unimaginable violence. The powerful impact of these works lies in their simplicity, as no complex interpretation is needed when confronted with the truth of the present situation. United Colours, a new series of lightboxes assails the viewer in harsh neon terms, with each lightbox taking a colour from one of the Arab national flags - green, black and red - to imagine a new flag order for a free Syria. Arabic text atop symbols of various weapons gives the initial appearance that these lightboxes are

advertisements for the sale of armaments. However, a single word – United - features in each lightbox: ‘United Nations’, ‘United States’ and ‘United Russia’. Azzam questions the movement of arms to each party in this struggle and suggests that all three entities are united only in their silence and lack of adequate international support for the people of Syria. Azzam’s crumbled and wounded globes, covered in black flies and refashioned into an army helmet further articulate a bleak outlook on Syria’s future. In We Were Here, a globe is used as a blackboard for the two small children silhouetted in the foreground. The older child points up to Syria’s position on the globe as if instructing the younger child in a geography lesson. This instruction also serves to inform an ignorant audience of Syria’s placement in a global context. Though a statement of reference for the millions of refugees fleeing Syria, We Were Here also serves as a statement of affirmation. Despite the lack of sufficient attention from the international political community, this statement confirms Syria’s existence as more than just a tumultuous country in a volatile region. Azzam articulates not only a people’s bewildered grief and confusion at their abrupt displacement, but the determination of the Syrian people to preserve their memories and histories of their homeland. Bon Voyage, the artist’s most recent series of work, depicts the journey of a war torn tenement building lifted straight from the streets of Damascus and carried by a large bunch of brightly coloured balloons high above some of the world’s most iconic landmarks. Reminiscent of The Red Balloon and Disney’s more recent popular animation, Up, Bon Voyage offers a poignant reminder that there are no “good travels” for the people of Syria. The title of this series references the mass exodus of refugees from the country as well as those civilians remaining within Syria. Not only are their movements severely restricted but the farewell phrase “good travels” is ridiculously optimistic and dismissive in light of the dangers of day to day travel, where arrests are common and people ‘disappear’ on a daily basis. The juxtaposition of the

cheerfully innocent balloons alongside the hollow shell of the bombed out building evokes the hundreds of lives and histories that were ultimately lost in its destruction. Highlighting the fragility of political structures in the wake of revolution, traveling from the Middle East to the Western world, Azzam’s innocent balloons elucidate the lack of attention given to the Syrian people from the Western powers. Transfigured into almost apocalyptic scenes, the landmarks of Lebanon, Geneva, Paris, London and New York are dramatically altered as the building and its balloons fly past them. Set against these ominous backdrops, the war torn building’s proximity to the structures, man-made or natural in Lebanon’s case, seems to cause these structures to fracture before our very eyes. Azzam’s feelings of betrayal at Lebanon’s response to Syrian refugees since the onset of the revolution manifest themselves in the huge crack in the centre of the Raouché, Beirut’s famous natural wonder. Referred to as Suicide Rock by the locals, this popular tourist sightseeing spot appears to have been struck by lightning. In London, a whirlpool in the Thames beside the Houses of Parliament threatens to capsize this historical and iconic political structure, while in Paris, the Eiffel Tower’s iron armature is transformed into the crumbling remnants of an architectural framework as the bombed building soars past. A sinkhole at the foot of the United Nations headquarters in Geneva threatens to swallow the Swiss headquarters and the international organisation’s mission of peace along with it. The dismay and anger at the lack of effective action from the UN in response to the chemical attacks carried out within Syria’s borders is evident. Similarly, Azzam questions why the world’s eyes turn automatically to New York City every year on

the anniversary of September 11, while turning a blind eye to the mass causalities that are a daily occurrence in Syria. The Western world observes and pays tribute to those who lost their lives in this terrorist attack, yet the international community keeps silent when thousands of Syrians die from similar aggressive action. Bon Voyage ultimately envisions an apocalyptic future of international diffusion of the idea and spark of revolution; a future in which no government organization is immune should this spark touch ground. "I, The Syrian" is Azzam's statement of identity- personal and artistic. Through his new digital artworks Azzam raises important humanitarian questions, interrogating the international political community and media on their continued silence and inaction in the face of the devastation being wrought in Syria. Azzam's personal emotions are expressed in the symbols of hope and humanity that resonate strongly throughout his work- his belief in the possibility of peace and reconciliation never wavers.

Founded by collectors and cousins Khaled and Hisham Samawi in Damascus in 2006, Ayyam Gallery sought to nurture Syriaâ&#x20AC;&#x2122;s burgeoning and dynamic contemporary art scene through landmark non-profit initiatives such as the Shabab Ayyam Project, an incubator for emerging artists. Expansion into Beirut and Dubai enabled Ayyam Gallery to broaden its scope from the promotion of work by Syrian artists to those from the wider Middle East region. In doing so, Ayyam Gallery has established itself as one of the foremost exponents of Middle Eastern contemporary art to the international community. Today, Ayyam Gallery is recognized as a leading cultural voice in the region, representing a roster of Arab and Iranian artists with an international profile and museum presence. A number of non-commercial exhibitions, as well as the launch of Ayyam Publishing, Ayyam Editions, and The Young Collectors Auction, have further succeeded in showcasing the work of Middle Eastern artists with the aim of educating a wider audience about the art of this significant region. Ayyam Gallery Damascus currently functions as a studio and creative haven for artists who remain in the wartorn city. In early 2013, Ayyam Gallery launched new spaces in London and Jeddah. 'I, The Syrian' by Tammam Azzam

'I, The Syrian' by Tammam Azzam