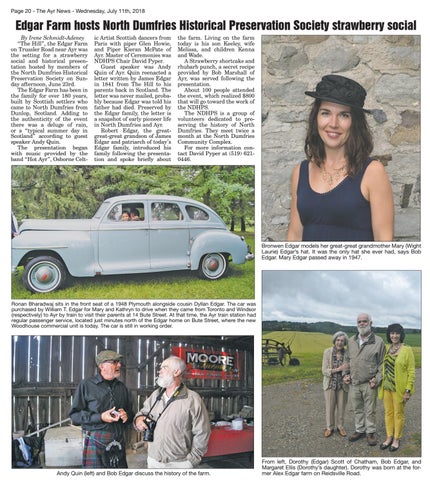 Edgar Farm hosts North Dumfries Historical Preservation Society strawberry social By Irene Schmidt-Adeney “The Hill”, the Edgar Farm on Trussler Road near Ayr was the setting for a strawberry social and historical presentation hosted by members of the North Dumfries Historical Preservation Society on Sunday afternoon, June 23rd. The Edgar Farm has been in the family for over 180 years, built by Scottish settlers who came to North Dumfries from Dunlop, Scotland. Adding to the authenticity of the event there was a deluge of rain, or a “typical summer day in Scotland” according to guest speaker Andy Quin. The presentation began with music provided by the band “Hot Ayr”, Osborne Celt-

ic Artist Scottish dancers from Paris with piper Glen Howie, and Piper Kieran McPate of Ayr. Master of Ceremonies was NDHPS Chair David Pyper. Guest speaker was Andy Quin of Ayr. Quin reenacted a letter written by James Edgar in 1841 from The Hill to his parents back in Scotland. The letter was never mailed, probably because Edgar was told his father had died. Preserved by the Edgar family, the letter is a snapshot of early pioneer life in North Dumfries and Ayr. Robert Edgar, the greatgreat-great grandson of James Edgar and patriarch of today’s Edgar family, introduced his family following the presentation and spoke briefly about

the farm. Living on the farm today is his son Keeley, wife Melissa, and children Kenna and Wade. A Strawberry shortcake and rhubarb punch, a secret recipe provided by Bob Marshall of Ayr, was served following the presentation. About 100 people attended the event, which realized $800 that will go toward the work of the NDHPS. The NDHPS is a group of volunteers dedicated to preserving the history of North Dumfries. They meet twice a month at the North Dumfries Community Complex. For more information contact David Pyper at (519) 6210446.

Bronwen Edgar models her great-great grandmother Mary (Wight Laurie) Edgar’s hat. It was the only hat she ever had, says Bob Edgar. Mary Edgar passed away in 1947.

Ronan Bharadwaj sits in the front seat of a 1948 Plymouth alongside cousin Dyllan Edgar. The car was purchased by William T. Edgar for Mary and Kathryn to drive when they came from Toronto and Windsor (respectively) to Ayr by train to visit their parents at 14 Bute Street. At that time, the Ayr train station had regular passenger service, located just minutes north of the Edgar home on Bute Street, where the new Woodhouse commercial unit is today. The car is still in working order.

Andy Quin (left) and Bob Edgar discuss the history of the farm.