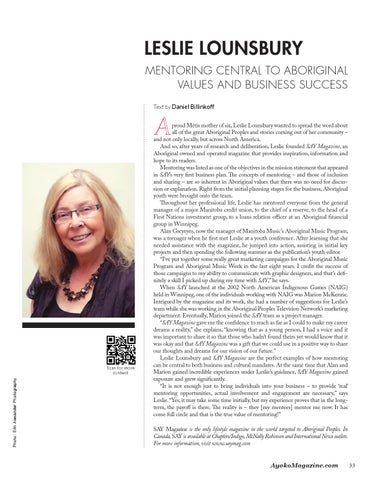 proud Métis mother of six, Leslie Lounsbury wanted to spread the word about all of the great Aboriginal Peoples and stories coming out of her community – and not only locally, but across North America. And so, after years of research and deliberation, Leslie founded SAY Magazine, an Aboriginal owned and operated magazine that provides inspiration, information and hope to its readers. Mentoring was listed as one of the objectives in the mission statement that appeared in SAY’s very first business plan. The concepts of mentoring – and those of inclusion and sharing – are so inherent in Aboriginal values that there was no need for discussion or explanation. Right from the initial planning stages for the business, Aboriginal youth were brought onto the team. Throughout her professional life, Leslie has mentored everyone from the general manager of a major Manitoba credit union, to the chief of a reserve, to the head of a First Nations investment group, to a loans relation officer at an Aboriginal financial group in Winnipeg. Alan Greyeyes, now the manager of Manitoba Music’s Aboriginal Music Program, was a teenager when he first met Leslie at a youth conference. After learning that she needed assistance with the magazine, he jumped into action, assisting in initial key projects and then spending the following summer as the publication’s youth editor. “I’ve put together some really great marketing campaigns for the Aboriginal Music Program and Aboriginal Music Week in the last eight years. I credit the success of those campaigns to my ability to communicate with graphic designers, and that’s definitely a skill I picked up during my time with SAY,” he says. When SAY launched at the 2002 North American Indigenous Games (NAIG) held in Winnipeg, one of the individuals working with NAIG was Marion McKenzie. Intrigued by the magazine and its work, she had a number of suggestions for Leslie’s team while she was working in the Aboriginal Peoples Television Network’s marketing department. Eventually, Marion joined the SAY team as a project manager. “SAY Magazine gave me the confidence to reach as far as I could to make my career dreams a reality,” she explains, “knowing that as a young person, I had a voice and it was important to share it so that those who hadn’t found theirs yet would know that it was okay and that SAY Magazine was a gift that we could use in a positive way to share our thoughts and dreams for our vision of our future.” Leslie Lounsbury and SAY Magazine are the perfect examples of how mentoring can be central to both business and cultural mandates. At the same time that Alan and Marion gained incredible experiences under Leslie’s guidance, SAY Magazine gained exposure and grew significantly. “It is not enough just to bring individuals into your business – to provide ‘real’ mentoring opportunities, actual involvement and engagement are necessary,” says Leslie. “Yes, it may take some time initially, but my experience proves that in the longterm, the payoff is there. The reality is – they [my mentees] mentor me now. It has come full circle and that is the true value of mentoring!” SAY Magazine is the only lifestyle magazine in the world targeted to Aboriginal Peoples. In Canada, SAY is available at Chapters/Indigo, McNally Robinson and International News outlets. For more information, visit www.saymag.com 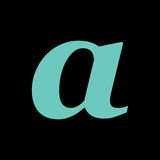