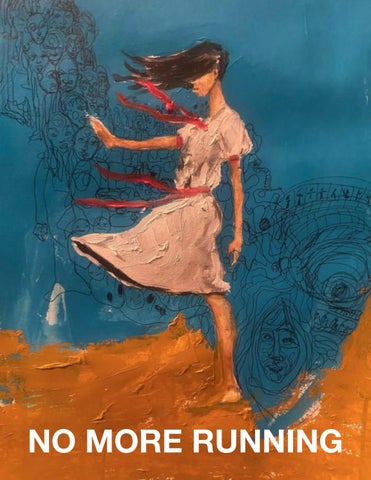 A PSA CAMAPIGN TO RAISE AWARENESS FOR

As we come back to enjoying large sporting events like the Super Bowl, we need to raise more awareness around Human Trafficking. Despite law enforcement’s recognition of this issue, the NFL maintains its denial of the correlation between their highest-grossing event and increased levels of sex trafficking activity. NFL spokespeople repeatedly have called the connection an urban legend, pointing to a lack of evidence that human trafficking crimes actually increase upon the descent of thousands of Super Bowl fans into the host city. But that position is poorly misguided. The underground nature of trafficking means that much of the activity goes undocumented but that does not mean it doesn’t exist. This serious societal problem is too important to refute or ignore because of stubborn denials or a lack of data. We are talking about innocent human lives. NO MORE RUNNING

The sheer number of men looking to pay for sex substantially increases in major cities during large sporting events like the Super Bowl. The influx of fans fosters the optimal breeding ground for pimps looking to boost their profits. According to Forbes, 10,000 prostitutes were brought to Miami for the Super Bowl in 2010. In 2011, 133 underage arrests for prostitution were made in Dallas during the Super Bowl. Those are just two examples that we know of.

If you don’t want to believe statistics, perhaps a trafficking survivor recounting her memory of an immense pressure to meet traffickers’ Super Bowl weekend demands will give you a different perspective. She recalls her personal experience and what was said to her: “If you don&#39;t make that number (of sex customers), you&#39;re going to dearly, dearly, severely pay for it…” “I mean with beatings, I mean with over and over rapings. With just straight torture. The worst torture they put on you is when they make you watch the other girl get tortured because of your mistake.” When it came time for the Super Bowl, she was expected to sleep with anywhere from 25 to 50 men a day.

Many experts share the opinion that any time you have a large gathering of people with a predominantly male attendance and there’s excess cash, you’re going to have an increase in sex trafficking. A study conducted in 2016 found similar spikes in human trafficking crimes during other major sporting events like the 2004 Athens Greece Olympics, the 2010 World Cup, and others. Of course the NFL and other sports organizations are not directly responsible for an increase in this type of crime in relevant cities. However, we do not understand their refusal to acknowledge and help raise awareness in order to save lives.

We need the NFL and other major sports organizations to admit that this is a problem. If they’re willing to acknowledge the issue and acknowledge the victims who deserve to be heard, they could play an instrumental role in raising awareness and being part of the solution instead of part of the problem. These large organizations have the greatest ability to touch millions of fans and raise awareness with important PSAs and messaging. Will they choose to raise awareness about what trafficking is and what can be done about it? Perhaps more importantly, will YOU do what you can to raise awareness? We need you to talk about it, share this information, and be on the lookout for the signs of potential trafficking victims AND perpetrators.

Signs a person may be a victim of human trafficking: ‣ Appearing

injured or having signs of physical abuse

in manners that seem rehearsed or scripted

to speak to individual alone

appear to be scripted and rehearsed

Assuming you have the opportunity to speak with a potential victim privately and without jeopardizing the victim’s safety because the trafficker is watching, here are some sample questions to ask to follow up on the red flags you became alert to: ‣ Can

you leave your job if you want to?

you come and go as you please?

‣ Have ‣ Has ‣ Do

you been hurt or threatened if you tried to leave?

your family been threatened?

you live with your employer?

do you sleep and eat?

you in debt to your employer?

you have your passport/identification? Who has it?

If you believe you have identified someone still in the trafficking situation, alert law enforcement immediately at the numbers provided below. It may be unsafe to attempt to rescue a trafficking victim. You have no way of knowing how the trafficker may react and retaliate against the victim and you.

If you identify a victim who has escaped the trafficking situation, there are a number of organizations to whom the victim could be referred for help with shelter, medical care, legal assistance &amp; other critical services.

The National Runaway Switchboard 1-800-RUNAWAY The National Runaway Switchboard serves as the federally-designated national communication system for homeless and runaway youth. NRS, with the support of more than 150 volunteers, handles an average of 100,000 calls annually – more than 3 million calls since the organization’s inception. Through hotline and online services, NRS provides crisis intervention, referrals to local resources, and education and prevention services to youth, families and community members throughout the country 24 hours a day, 365 days a year. 1800RUNAWAY.org

National Center for Missing &amp; Exploited Children 1-800-843-5678 As the nation’s clearinghouse and comprehensive reporting center for all issues related to the prevention of and recovery from child victimization, NCMEC leads the fight against abduction, abuse, and exploitation – because every child deserves a safe childhood. MissingKids.com

A PSA Campaign to Raise Awareness for Human Trafficking www.awarenessties.us/nomorerunning