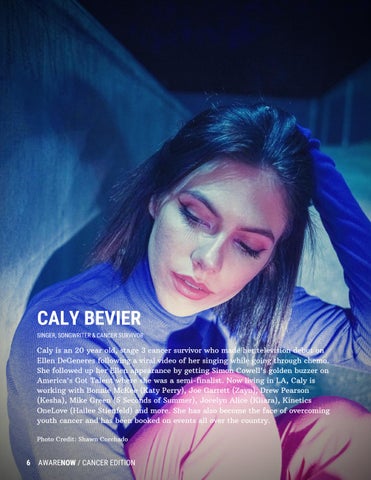 Caly is an 20 year old, stage 3 cancer survivor who made her television debut on Ellen DeGeneres following a viral video of her singing while going through chemo. She followed up her Ellen appearance by getting Simon Cowell&#39;s golden buzzer on America&#39;s Got Talent where she was a semi-finalist. Now living in LA, Caly is working with Bonnie McKee (Katy Perry), Joe Garrett (Zayn), Drew Pearson (Kesha), Mike Green (5 Seconds of Summer), Jocelyn Alice (Kiiara), Kinetics OneLove (Hailee Stienfeld) and more. She has also become the face of overcoming youth cancer and has been booked on events all over the country. Photo Credit: Shawn Corchado

Presented by Awareness Ties, AwareNow is the 'Official Monthly Magazine for Causes'.