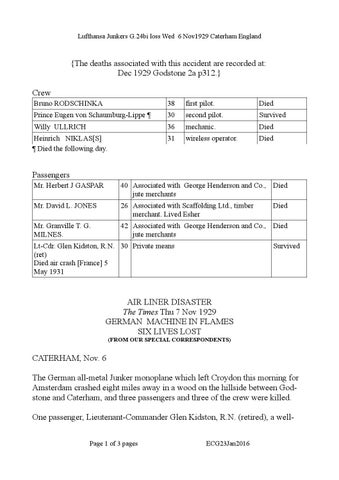 {The deaths associated with this accident are recorded at: Dec 1929 Godstone 2a p312.} Crew Bruno RODSCHINKA

CATERHAM, Nov. 6 The German all-metal Junker monoplane which left Croydon this morning for Amsterdam crashed eight miles away in a wood on the hillside between Godstone and Caterham, and three passengers and three of the crew were killed. One passenger, Lieutenant-Commander Glen Kidston, R.N. (retired), a wellPage 1 of 3 pages

known racing motorist and a qualified air pilot, and the second pilot of the monoplane, Prince Eugen von Schaumburg-Lippe, escaped with their lives, though the latter is suffering from very severe injuries. On striking the ground the monoplane caught fire and burned so fiercely that there was no possibility of rescuing the other occupants. The scene of the disaster, View Point, near the old forts at Tupwood, is one of the beautiful places of this part of Surrey and a very favourite resort of picnic parties. In the valley below are long stretches of agricultural land, but the hill rises very sharply and the upper part is thickly wooded. The aeroplane charged this wood, left part of a wing on the upper branches of a tree on its outskirts, and ploughed its way through the tree tops, breaking off branches and leaving more and more metal work, like huge birds&#39; nests, to mark its progress. As it pene-trated farther into the wood the resistance became greater, owing to the rising ground; it was now cutting through the trees lower down, where the trunks were thicker, and at the first small clearing it dropped to the ground with a crash. In the thick mist of the morning it is probable that the pilot never saw the wood until he was right on top of it. Local opinion is divided as to how he came to be at that particular point. It is on the direct route taken by this aeroplane in fine weather, but when it is foggy, as it was this morning, a course is usually laid along the valley. One view widely held is that the pilot, finding the fog so thick, was turning to return to Croydon. Others who heard the aeroplane passing overhead declare that it was following the fine weather route and flying so low that they rushed out to look for it, but the fog overhead completely concealed it from view. If this was so, the pilot may have thought that he was at a greater altitude, and he would be in the tree tops, which were hidden by the fog, before he knew that they were there. The prolonged grinding crash of the monoplane through the trees could be heard a long way off, and the explosion which followed indicated to all who had heard the engines that another air disaster had taken place. Agricultural labourers, gardeners, and men engaged on the Caterham-Godstone road rushed to the scene of the accident; but they were all some distance away, and some of them. lost time searching through the fog for the aeroplane. Before any of them got there the aeroplane was a mass of flames. Page 2 of 3 pages

ATTEMPTS AT RESCUE Commander Glen Kidston escaped through a hole in the side of the aeroplane almost immediately after it struck the ground, and Prince Eugen fought his way out a little later; but by the time would-be rescuers arrived there was no hope of saving the others. Their cries could be heard some distance away, but when the first of the eager volunteers reached the aeroplane all seemed to be dead. There was, at any rate, no movement and no sign of consciousness. The fire was now burning so fiercely that some of the trees were alight, and it was difficult to approach the machine. One man had brought a rope, and with this an attempt was made to pull away a petrol container which was throwing out terrific heat close to the bodies in the aeroplane; but this was unsuccessful, and until firemen arrived from Caterham with extinguishers the onlookers could do nothing but watch the flames. By that time the air liner had been reduced to a mass of tangled metal. The firemen were greatly hampered in their efforts to reach the flames by the steepness of the hill and the slippery track by which they had to climb it. They eventually put the fire out, and with the help of police and a detachment of the Royal Air Force from Kenley Aerodrome what remained of the bodies was collected and removed to the Caterham mortuary. lllll 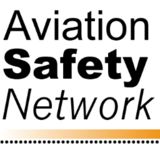