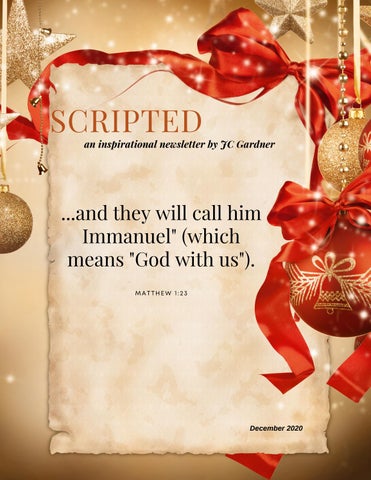 an inspirational newsletter by JC Gardner

The Greatest Gift to Man! Merry Christmas and Happy New Year! Wow. 2020 is one for the record books. I feel blessed and grateful for me and my family&#39;s health, strength, sound mind and body, a job, benefits, shelter and food. That&#39;s the glass half full approach. That&#39;s the saving grace, the hedge of protection provided by God, the covering, the blood of Jesus, the fact we are still here with another day to get it right because it didn&#39;t have to be! My prayer for you is that this holiday season be a special one for you. That if you are able to read this, you know you are blessed and highly favored. That your life has meaning and purpose. If you have lost loved ones this year, I pray you are granted peace that surpasses all understanding and you are comforted by God&#39;s love and Jesus&#39; promise of everlasting life. But I know it&#39;s hard.

There are so many Christmas songs that are fan favorites, but this old-school song&#39;s lyrics just bring me joy. I found the composer to be Theodore Toles. Here is the Youtube Link to Greatest Gift to Man and the lyrics below is how I was taught to sing it by my favorite Choir Directress, Shelia Lewis. It never gets old. Get your joy on!

Stripes on the candy cane represent the blood of Jesus.

Well...it would be nice if this were true, but it&#39;s probably not true but something that evolved as possible &quot;fact&quot; over time cause we are a creative people. &quot;Legend has it that the candy cane dates back to 1670, when a choirmaster in Germany handed out sugar sticks among his young singers to keep them quiet during a ceremony, In honor of the occasion, he bent the candies into

I surely don&#39;t mean to burst anyone&#39;s bubble but, well, Santa Claus isn&#39;t real. Shocking, right? LOL okay, that&#39;s an easy one, but here are some other fascinating facts with a bit of JC humor! Jesus was probably not born on December 25th.

There is actually no date of his birth in the Bible, but based on certain scriptural references, it was probably late Fall because of what was going on with those pesky sheep. Since the shepherds were still guarding their flocks in the fields, it can be inferred the angels proclaimed the message of Jesus’ birth in October at the latest. There is no mention of 3 wise men . Yup, it just says

&quot;wise men&quot; but not how many. (Matthew 2:1) But 3 sounds like a nice number and is probably based on the fact there were three gifts given to baby Jesus of gold, frankincense and myrrh AND Jesus was probably more like a toddler by the time they arrived on their camel stallions. You KNOW they needed a lot of butt breaks.

shepherds’ crooks.&quot; Luke 2:7 which says that when Jesus was born, Mary laid Him in a manger.

And where was this manger? A lot of songs and sermons lead us to believe the manger was probably in a barn or outside, but guess what? Back then, sometimes mangers were inside houses too! Who knew? And that, boys and girls, is the end of your Christmas lessons. Tomorrow there will be a pop quiz! JK!

Women&#39;s Survivor Series l a i Spec Lisa Smith-Weddington t Gues e COVID-19 Survivor r u I&#39;ve known Lisa for many years, as we were colleagues at the Feat same organization before she embarked on a career in education. Not only did she contract COVID-19, so did her husband.

Lisa is a married mother of four mighty men of valor and works as an educator in Early Childhood Education Administration as a Regional Compliance Coordinator. She has a passion for working with children and loves to see them succeed. In July 2020, after attending an event out of state, she wasn&#39;t feeling well and went to the doctor. Nowadays any cough or sneeze can be worrisome because it seems like the common cold has taken a back seat to COVID-19. Lisa had four symptoms: Scratchy throat, coughing, mild breathing issues and lethargy. The test result was positive for COVID-19. With so many people dying from it, it was a terrifying diagnosis. To make matters worse, a week later, her husband started showing symptoms as well. &quot;He had 8 of the 11 symptoms. A couple of times it was touch and go. He contracted pneumonia and blood clots on his lungs and is still on medication.&quot; Lisa had underlying conditions and expected to feel the brunt of the virus, while her husband had no underlying conditions, but suffered the most. He was even hospitalized, due to the severity. His recovery was long and difficult. Her strong belief in God helped her to be resilient for her husband. “We could have lost him on a couple occasions based on his personal testimony as he recalled the experience.”

Lisa noted how there is no way to know how the virus will affect you, as it mutates and changes once inside the body. &quot;Dealing with this virus was one of the toughest times of my life, but it showed me that I was stronger than I thought. God sustained me when I thought I was going to fall apart. I had to be strong to intercede on behalf of my husband. God’s grace was sufficient in my weakness.&quot; She offers advice to those who are newly diagnosed. &quot;Stay positive and pray, pray, pray. Make sure you have people around who can speak life over you. I never let go of God’s hand and never gave up on my husband.&quot; Today, Lisa has fully recovered and has no lingering effects. There was a time when people were saying COVID was a hoax; there are still some naysayers out there who will not acknowledge the legitimacy of the virus. Lisa pleads, &quot;Please adhere to what the scientists are saying. This disease is no joke and people are still dying at an alarming rate. Be cognizant how you move and never assume someone else around you doesn’t have the virus.&quot; What makes you a survivor? “My faith and power of prayer kept both me and my husband, and by God’s grace, we both survived.”

Millennial Hot News BY ALEXIS GARDNER The Decline of Movie Theaters?: Theater attendance is diminishing as streaming services move to release their movies on their platforms. HBO Max and Disney+ are just two major streaming services who have decided to release their highly anticipated films on their platforms, some on Christmas Day. Millions watched the highly anticipated WW84 on HBO Max and Soul on Disney+. Designer or Cheap?: A simple tweet about a girl feeling spoiled by her boyfriend, because he gifted her a Michael Kors bag, sparked a huge debate on Twitter. Does Michael Kors count as designer? And is it worth bragging about owning? So many things going on in the world, but this is what people chose to fixate on. The general consensus seemed to be a few things: 1. Why does it matter? If you like it and you think it looks good then it shouldn’t matter if it’s designer or not. 2. Michael Kors is considered a designer brand and there are different collections. What’s sold in TJ Maxx or Macy’s is not the same as what is sold in his stores. What&#39;s sold in his stores is considered to be more higher end. 3. How can people wear inexpensive fast-fashion brands like Fashion Nova, Shein, Pretty Little Thing but then shame those who wear Michael Kors? So what do you think? Is Michael Kors a designer, luxury brand? Would you be happy to receive a purse, wallet, etc., as a gift? Stimulus Checks: The U.S. government has proven once again that we are indeed the *greatest* country (sarcasm) by blessing us with, wait for it, $600 stimulus checks! What’s that? 45 wants to give us $2,000 checks but the House won’t approve it? Shocker. Very on par for the U.S. We have an entire country struggling to survive and only $1200 to show for it. Not only that, not everyone received $1200 and it didn’t include college students. Of course I have to acknowledge the extra unemployment some may have received, but that system is also flawed and not everyone received that as well. For a country that seems to brag about how they’re the best in every aspect, we seem to be behind almost everyone else. Some even go as far to call the U.S. a third-world country in a Gucci belt. Ouch.

Check out my joy at winning at the 12/17 Distinguished Authors Guild Award Show where I won 3 literary awards!

God is So Good!

An inspirational newsletter by JC Gardner