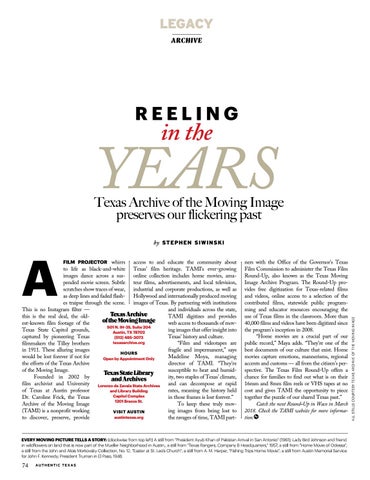 Texas Archive of the Moving Image preserves our flickering past

access to and educate the community about FILM PROJECTOR whirrs to life as black-and-white Texas’ film heritage. TAMI’s ever-growing images dance across a sus- online collection includes home movies, amapended movie screen. Subtle teur films, advertisements, and local television, scratches show traces of wear, industrial and corporate productions, as well as as deep lines and faded flash- Hollywood and internationally produced moving es traipse through the scene. images of Texas. By partnering with institutions and individuals across the state, This is no Instagram filter — Texas Archive TAMI digitizes and provides this is the real deal, the oldof the Moving Image web access to thousands of movest-known film footage of the 501 N. IH-35, Suite 204 ing images that offer insight into Texas State Capitol grounds, Austin, TX 78702 Texas’ history and culture. captured by pioneering Texas (512) 485-3073 texasarchive.org “Film and videotapes are filmmakers the Tilley brothers fragile and impermanent,” says in 1911. These alluring images HOURS Madeline Moya, managing would be lost forever if not for Open by Appointment Only director of TAMI. “They’re the efforts of the Texas Archive susceptible to heat and humidof the Moving Image. Texas State Library ity, two staples of Texas’ climate, Founded in 2002 by and Archives film archivist and University Lorenzo de Zavala State Archives and can decompose at rapid rates, meaning the history held of Texas at Austin professor and Library Building Capitol Complex in those frames is lost forever.” Dr. Caroline Frick, the Texas 1201 Brazos St. To keep these truly movArchive of the Moving Image ing images from being lost to (TAMI) is a nonprofit working VISIT AUSTIN austintexas.org the ravages of time, TAMI partto discover, preserve, provide

ners with the Office of the Governor’s Texas Film Commission to administer the Texas Film Round-Up, also known as the Texas Moving Image Archive Program. The Round-Up provides free digitization for Texas-related films and videos, online access to a selection of the contributed films, statewide public programming and educator resources encouraging the use of Texas films in the classroom. More than 40,000 films and videos have been digitized since the program’s inception in 2008. “Home movies are a crucial part of our public record,” Maya adds. “They’re one of the best documents of our culture that exist. Home movies capture emotions, mannerisms, regional accents and customs — all from the citizen’s perspective. The Texas Film Round-Up offers a chance for families to find out what is on their 16mm and 8mm film reels or VHS tapes at no cost and gives TAMI the opportunity to piece together the puzzle of our shared Texas past.” Catch the next Round-Up in Waco in March 2018. Check the TAMI website for more information.

EVERY MOVING PICTURE TELLS A STORY: (clockwise from top left) A still from “President Ayub Khan of Pakistan Arrival in San Antonio” (1961); Lady Bird Johnson and friend in wildflowers on land that is now part of the Mueller Neighborhood in Austin.; a still from “Texas Rangers, Company B Headquarters,” 1957; a still from “Home Movie of Odessa”; a still from the John and Alois Morkovsky Collection, No. 12, “Easter at St. Leo’s Church”; a still from A. M. Harper, “Fishing Trips Home Movie”; a still from Austin Memorial Service for John F. Kennedy; President Truman in El Paso, 1948.

ALL STILLS COURTESY TEXAS ARCHIVE OF THE MOVING IMAGE 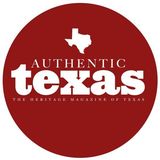