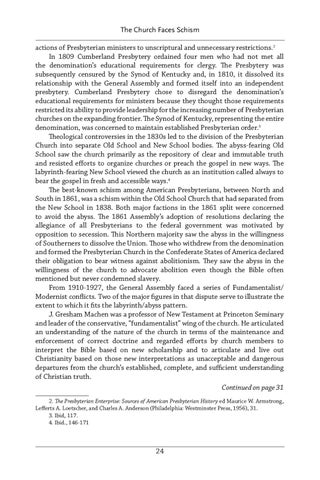 The Church Faces Schism actions of Presbyterian ministers to unscriptural and unnecessary restrictions.2 In 1809 Cumberland Presbytery ordained four men who had not met all the denomination’s educational requirements for clergy. The Presbytery was subsequently censured by the Synod of Kentucky and, in 1810, it dissolved its relationship with the General Assembly and formed itself into an independent presbytery. Cumberland Presbytery chose to disregard the denomination’s educational requirements for ministers because they thought those requirements restricted its ability to provide leadership for the increasing number of Presbyterian churches on the expanding frontier. The Synod of Kentucky, representing the entire denomination, was concerned to maintain established Presbyterian order.3 Theological controversies in the 1830s led to the division of the Presbyterian Church into separate Old School and New School bodies. The abyss-fearing Old School saw the church primarily as the repository of clear and immutable truth and resisted efforts to organize churches or preach the gospel in new ways. The labyrinth-fearing New School viewed the church as an institution called always to bear the gospel in fresh and accessible ways.4 The best-known schism among American Presbyterians, between North and South in 1861, was a schism within the Old School Church that had separated from the New School in 1838. Both major factions in the 1861 split were concerned to avoid the abyss. The 1861 Assembly’s adoption of resolutions declaring the allegiance of all Presbyterians to the federal government was motivated by opposition to secession. This Northern majority saw the abyss in the willingness of Southerners to dissolve the Union. Those who withdrew from the denomination and formed the Presbyterian Church in the Confederate States of America declared their obligation to bear witness against abolitionism. They saw the abyss in the willingness of the church to advocate abolition even though the Bible often mentioned but never condemned slavery. From 1910-1927, the General Assembly faced a series of Fundamentalist/ Modernist conflicts. Two of the major figures in that dispute serve to illustrate the extent to which it fits the labyrinth/abyss pattern. J. Gresham Machen was a professor of New Testament at Princeton Seminary and leader of the conservative, “fundamentalist” wing of the church. He articulated an understanding of the nature of the church in terms of the maintenance and enforcement of correct doctrine and regarded efforts by church members to interpret the Bible based on new scholarship and to articulate and live out Christianity based on those new interpretations as unacceptable and dangerous departures from the church’s established, complete, and sufficient understanding of Christian truth. Continued on page 31 2. The Presbyterian Enterprise: Sources of American Presbyterian History ed Maurice W. Armstrong, Lefferts A. Loetscher, and Charles A. Anderson (Philadelphia: Westminster Press, 1956), 31. 3. Ibid, 117. 4. Ibid., 146-171 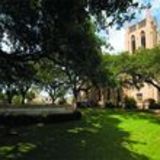