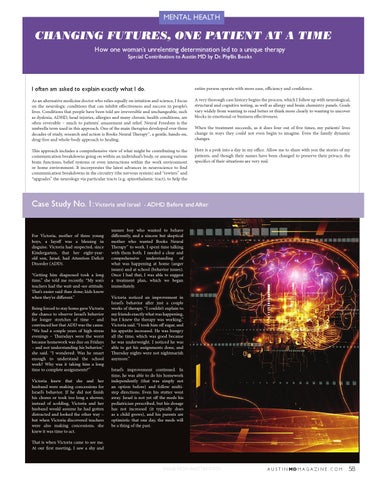 As an alternative medicine doctor who relies equally on intuition and science, I focus on the neurologic conditions that can inhibit effectiveness and success in people’s lives. Conditions that people have been told are irreversible and unchangeable, such as dyslexia, ADHD, head injuries, allergies and many chronic health conditions, are often reversible – much to patients’ amazement and relief. Neural Freedom is the umbrella term used in this approach. One of the main therapies developed over three decades of study, research and action is Books Neural Therapy™, a gentle, hands-on, drug-free and whole-body approach to healing.

A very thorough case history begins the process, which I follow up with neurological, structural and cognitive testing, as well as allergy and brain chemistry panels. Goals vary widely from wanting to read better or think more clearly to wanting to uncover blocks in emotional or business effectiveness.

This approach includes a comprehensive view of what might be contributing to the communication breakdowns going on within an individual’s body, or among various brain functions, belief systems or even interactions within the work environment or home environment. It incorporates the latest advances in neuroscience to find communication breakdowns in the circuitry (the nervous system) and “rewires” and “upgrades” the neurology via particular tracts (e.g. spinothalamic tract), to help the

When the treatment succeeds, as it does four out of five times, my patients’ lives change in ways they could not even begin to imagine. Even the family dynamic changes. Here is a peek into a day in my office. Allow me to share with you the stories of my patients, and though their names have been changed to preserve their privacy, the specifics of their situations are very real.

For Victoria, mother of three young boys, a layoff was a blessing in disguise. Victoria had suspected, since Kindergarten, that her eight-yearold son, Israel, had Attention Deficit Disorder (ADD). “Getting him diagnosed took a long time,” she told me recently. “My son’s teachers had the wait-and-see attitude. That’s easier said than done; kids know when they’re different.” Being forced to stay home gave Victoria the chance to observe Israel’s behavior for longer stretches of time – and convinced her that ADD was the cause. “We had a couple years of high-stress evenings – Thursdays were the worst because homework was due on Fridays – and not understanding his behavior,” she said. “I wondered: Was he smart enough to understand the school work? Why was it taking him a long time to complete assignments?” Victoria knew that she and her husband were making concessions for Israel’s behavior. If he did not finish his chores or took too long a shower, instead of scolding, Victoria and her husband would assume he had gotten distracted and looked the other way – but when Victoria discovered teachers were also making concessions, she knew it was time to act.

unsure boy who wanted to behave differently, and a sincere but skeptical mother who wanted Books Neural Therapy™ to work. I spent time talking with them both. I needed a clear and comprehensive understanding of what was happening at home (anger issues) and at school (behavior issues). Once I had that, I was able to suggest a treatment plan, which we began immediately. Victoria noticed an improvement in Israel’s behavior after just a couple weeks of therapy. “I couldn’t explain to my friends exactly what was happening, but I knew the therapy was working,” Victoria said. “I took him off sugar, and his appetite increased. He was hungry all the time, which was good because he was underweight. I noticed he was able to get his assignments done, and Thursday nights were not nightmarish anymore.” Israel’s improvement continued. In time, he was able to do his homework independently (that was simply not an option before) and follow multistep directions. Even his stutter went away. Israel is not yet off the meds his pediatrician prescribed, but his dosage has not increased (it typically does as a child grows), and his parents are optimistic that one day, the meds will be a thing of the past.

That is when Victoria came to see me. At our first meeting, I saw a shy and 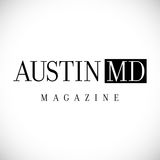