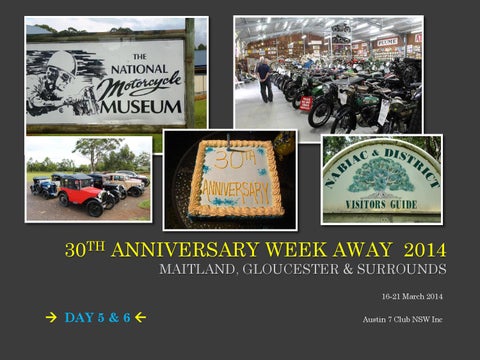 Day 5 &amp; 6 Day 5 we departed from Gloucester and travelled through heavy rain with extremely rough roads to Nabiac National Motorcycle Museum. Morning Tea we stopped in a local Nabiac park and whilst the ladies visited the shops, the men visited a local White Metal Workshop before driving via Wootton on to Bulahdelah for a late lunch. After lunch we drove back to our motel at Tarro with dinner tonight at the Beresfield Bowling Club. Day 6, we departed Tarro and was taken by Graham Burgess and Elaine Taylor on a scenic driving tour along the foreshores and beaches of Newcastle bringing us back to Swansea for our farewell late morning tea. Then everyone headed for home. Another great week away was had by all! 16-21 March 2014

This place is a motorcycle enthusiastâ&amp;#x20AC;&amp;#x2122;s haven

A tribute to Dale Buggins was on display

Arriving back at Swansea for late morning tea before heading on our homeward journeys. 16-21 March 2014

We hope you enjoyed Day 5 &amp; 6 Photos from the Nabiac National Motorcycle Museum, Bulahdelah, and our final days scenic drive through the foreshores of Newcastle.

30th Anniversary Week Away ~ The End ~

A photo album of the Austin 7 Club NSW Inc