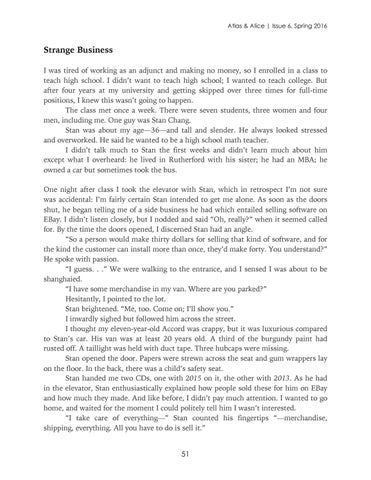 Strange Business I was tired of working as an adjunct and making no money, so I enrolled in a class to teach high school. I didn’t want to teach high school; I wanted to teach college. But after four years at my university and getting skipped over three times for full-time positions, I knew this wasn’t going to happen. The class met once a week. There were seven students, three women and four men, including me. One guy was Stan Chang. Stan was about my age—36—and tall and slender. He always looked stressed and overworked. He said he wanted to be a high school math teacher. I didn’t talk much to Stan the first weeks and didn’t learn much about him except what I overheard: he lived in Rutherford with his sister; he had an MBA; he owned a car but sometimes took the bus. One night after class I took the elevator with Stan, which in retrospect I’m not sure was accidental: I’m fairly certain Stan intended to get me alone. As soon as the doors shut, he began telling me of a side business he had which entailed selling software on EBay. I didn’t listen closely, but I nodded and said “Oh, really?” when it seemed called for. By the time the doors opened, I discerned Stan had an angle. “So a person would make thirty dollars for selling that kind of software, and for the kind the customer can install more than once, they’d make forty. You understand?” He spoke with passion. “I guess. . .” We were walking to the entrance, and I sensed I was about to be shanghaied. “I have some merchandise in my van. Where are you parked?” Hesitantly, I pointed to the lot. Stan brightened. “Me, too. Come on; I’ll show you.” I inwardly sighed but followed him across the street. I thought my eleven-year-old Accord was crappy, but it was luxurious compared to Stan’s car. His van was at least 20 years old. A third of the burgundy paint had rusted off. A taillight was held with duct tape. Three hubcaps were missing. Stan opened the door. Papers were strewn across the seat and gum wrappers lay on the floor. In the back, there was a child’s safety seat. Stan handed me two CDs, one with 2015 on it, the other with 2013. As he had in the elevator, Stan enthusiastically explained how people sold these for him on EBay and how much they made. And like before, I didn’t pay much attention. I wanted to go home, and waited for the moment I could politely tell him I wasn’t interested. “I take care of everything—” Stan counted his fingertips “—merchandise, shipping, everything. All you have to do is sell it.” 51