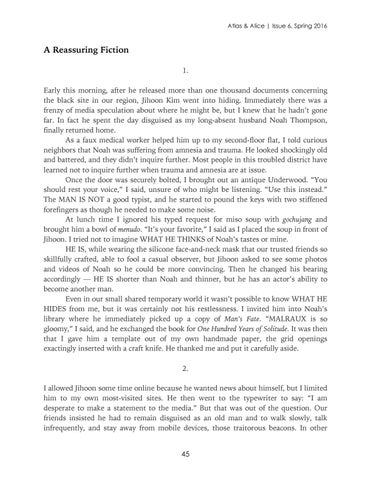 A Reassuring Fiction 1. Early this morning, after he released more than one thousand documents concerning the black site in our region, Jihoon Kim went into hiding. Immediately there was a frenzy of media speculation about where he might be, but I knew that he hadn’t gone far. In fact he spent the day disguised as my long-absent husband Noah Thompson, finally returned home. As a faux medical worker helped him up to my second-floor flat, I told curious neighbors that Noah was suffering from amnesia and trauma. He looked shockingly old and battered, and they didn’t inquire further. Most people in this troubled district have learned not to inquire further when trauma and amnesia are at issue. Once the door was securely bolted, I brought out an antique Underwood. “You should rest your voice,” I said, unsure of who might be listening. “Use this instead.” The MAN IS NOT a good typist, and he started to pound the keys with two stiffened forefingers as though he needed to make some noise. At lunch time I ignored his typed request for miso soup with gochujang and brought him a bowl of menudo. “It’s your favorite,” I said as I placed the soup in front of Jihoon. I tried not to imagine WHAT HE THINKS of Noah’s tastes or mine. HE IS, while wearing the silicone face-and-neck mask that our trusted friends so skillfully crafted, able to fool a casual observer, but Jihoon asked to see some photos and videos of Noah so he could be more convincing. Then he changed his bearing accordingly — HE IS shorter than Noah and thinner, but he has an actor’s ability to become another man. Even in our small shared temporary world it wasn’t possible to know WHAT HE HIDES from me, but it was certainly not his restlessness. I invited him into Noah’s library where he immediately picked up a copy of Man’s Fate. “MALRAUX is so gloomy,” I said, and he exchanged the book for One Hundred Years of Solitude. It was then that I gave him a template out of my own handmade paper, the grid openings exactingly inserted with a craft knife. He thanked me and put it carefully aside. . 2. I allowed Jihoon some time online because he wanted news about himself, but I limited him to my own most-visited sites. He then went to the typewriter to say: “I am desperate to make a statement to the media.” But that was out of the question. Our friends insisted he had to remain disguised as an old man and to walk slowly, talk infrequently, and stay away from mobile devices, those traitorous beacons. In other 45