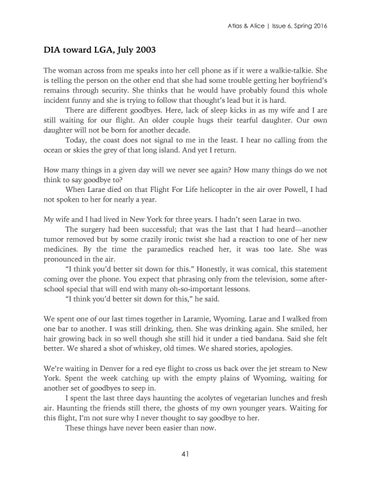 DIA toward LGA, July 2003 The woman across from me speaks into her cell phone as if it were a walkie-talkie. She is telling the person on the other end that she had some trouble getting her boyfriend’s remains through security. She thinks that he would have probably found this whole incident funny and she is trying to follow that thought’s lead but it is hard. There are different goodbyes. Here, lack of sleep kicks in as my wife and I are still waiting for our flight. An older couple hugs their tearful daughter. Our own daughter will not be born for another decade. Today, the coast does not signal to me in the least. I hear no calling from the ocean or skies the grey of that long island. And yet I return. How many things in a given day will we never see again? How many things do we not think to say goodbye to? When Larae died on that Flight For Life helicopter in the air over Powell, I had not spoken to her for nearly a year. My wife and I had lived in New York for three years. I hadn’t seen Larae in two. The surgery had been successful; that was the last that I had heard—another tumor removed but by some crazily ironic twist she had a reaction to one of her new medicines. By the time the paramedics reached her, it was too late. She was pronounced in the air. “I think you’d better sit down for this.” Honestly, it was comical, this statement coming over the phone. You expect that phrasing only from the television, some afterschool special that will end with many oh-so-important lessons. “I think you’d better sit down for this,” he said. We spent one of our last times together in Laramie, Wyoming. Larae and I walked from one bar to another. I was still drinking, then. She was drinking again. She smiled, her hair growing back in so well though she still hid it under a tied bandana. Said she felt better. We shared a shot of whiskey, old times. We shared stories, apologies. We’re waiting in Denver for a red eye flight to cross us back over the jet stream to New York. Spent the week catching up with the empty plains of Wyoming, waiting for another set of goodbyes to seep in. I spent the last three days haunting the acolytes of vegetarian lunches and fresh air. Haunting the friends still there, the ghosts of my own younger years. Waiting for this flight, I’m not sure why I never thought to say goodbye to her. These things have never been easier than now. 41