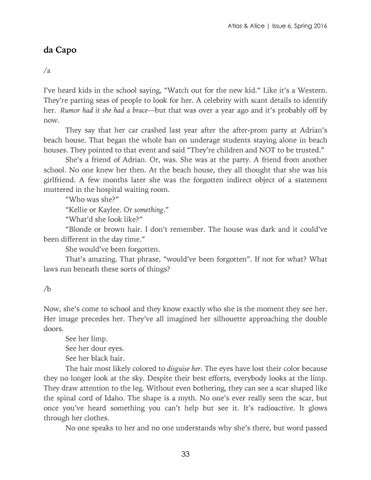 da Capo /a I’ve heard kids in the school saying, “Watch out for the new kid.” Like it’s a Western. They’re parting seas of people to look for her. A celebrity with scant details to identify her. Rumor had it she had a brace—but that was over a year ago and it’s probably off by now. They say that her car crashed last year after the after-prom party at Adrian’s beach house. That began the whole ban on underage students staying alone in beach houses. They pointed to that event and said “They’re children and NOT to be trusted.” She’s a friend of Adrian. Or, was. She was at the party. A friend from another school. No one knew her then. At the beach house, they all thought that she was his girlfriend. A few months later she was the forgotten indirect object of a statement muttered in the hospital waiting room. “Who was she?” “Kellie or Kaylee. Or something.” “What’d she look like?” “Blonde or brown hair. I don’t remember. The house was dark and it could’ve been different in the day time.” She would’ve been forgotten. That’s amazing. That phrase, “would’ve been forgotten”. If not for what? What laws run beneath these sorts of things? /b Now, she’s come to school and they know exactly who she is the moment they see her. Her image precedes her. They’ve all imagined her silhouette approaching the double doors. See her limp. See her dour eyes. See her black hair. The hair most likely colored to disguise her. The eyes have lost their color because they no longer look at the sky. Despite their best efforts, everybody looks at the limp. They draw attention to the leg. Without even bothering, they can see a scar shaped like the spinal cord of Idaho. The shape is a myth. No one’s ever really seen the scar, but once you’ve heard something you can’t help but see it. It’s radioactive. It glows through her clothes. No one speaks to her and no one understands why she’s there, but word passed 33