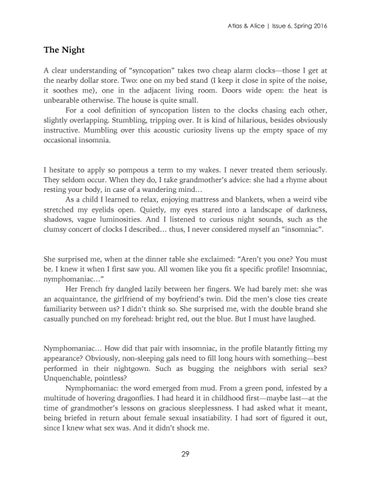 The Night A clear understanding of “syncopation” takes two cheap alarm clocks—those I get at the nearby dollar store. Two: one on my bed stand (I keep it close in spite of the noise, it soothes me), one in the adjacent living room. Doors wide open: the heat is unbearable otherwise. The house is quite small. For a cool definition of syncopation listen to the clocks chasing each other, slightly overlapping. Stumbling, tripping over. It is kind of hilarious, besides obviously instructive. Mumbling over this acoustic curiosity livens up the empty space of my occasional insomnia.

I hesitate to apply so pompous a term to my wakes. I never treated them seriously. They seldom occur. When they do, I take grandmother’s advice: she had a rhyme about resting your body, in case of a wandering mind… As a child I learned to relax, enjoying mattress and blankets, when a weird vibe stretched my eyelids open. Quietly, my eyes stared into a landscape of darkness, shadows, vague luminosities. And I listened to curious night sounds, such as the clumsy concert of clocks I described… thus, I never considered myself an “insomniac”.

She surprised me, when at the dinner table she exclaimed: “Aren’t you one? You must be. I knew it when I first saw you. All women like you fit a specific profile! Insomniac, nymphomaniac…” Her French fry dangled lazily between her fingers. We had barely met: she was an acquaintance, the girlfriend of my boyfriend’s twin. Did the men’s close ties create familiarity between us? I didn’t think so. She surprised me, with the double brand she casually punched on my forehead: bright red, out the blue. But I must have laughed.

Nymphomaniac… How did that pair with insomniac, in the profile blatantly fitting my appearance? Obviously, non-sleeping gals need to fill long hours with something—best performed in their nightgown. Such as bugging the neighbors with serial sex? Unquenchable, pointless? Nymphomaniac: the word emerged from mud. From a green pond, infested by a multitude of hovering dragonflies. I had heard it in childhood first—maybe last—at the time of grandmother’s lessons on gracious sleeplessness. I had asked what it meant, being briefed in return about female sexual insatiability. I had sort of figured it out, since I knew what sex was. And it didn’t shock me. 29