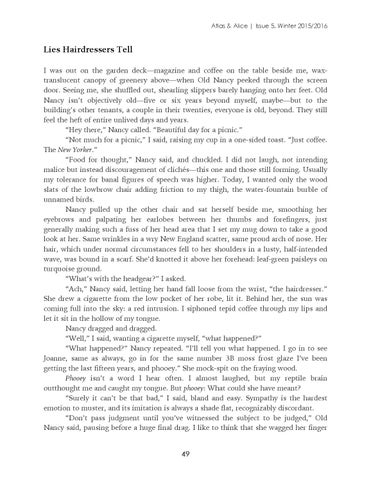 Lies Hairdressers Tell I was out on the garden deck—magazine and coffee on the table beside me, waxtranslucent canopy of greenery above—when Old Nancy peeked through the screen door. Seeing me, she shuffled out, shearling slippers barely hanging onto her feet. Old Nancy isn’t objectively old—five or six years beyond myself, maybe—but to the building’s other tenants, a couple in their twenties, everyone is old, beyond. They still feel the heft of entire unlived days and years. “Hey there,” Nancy called. “Beautiful day for a picnic.” “Not much for a picnic,” I said, raising my cup in a one-sided toast. “Just coffee. The New Yorker.” “Food for thought,” Nancy said, and chuckled. I did not laugh, not intending malice but instead discouragement of clichés—this one and those still forming. Usually my tolerance for banal figures of speech was higher. Today, I wanted only the wood slats of the lowbrow chair adding friction to my thigh, the water-fountain burble of unnamed birds. Nancy pulled up the other chair and sat herself beside me, smoothing her eyebrows and palpating her earlobes between her thumbs and forefingers, just generally making such a fuss of her head area that I set my mug down to take a good look at her. Same wrinkles in a wry New England scatter, same proud arch of nose. Her hair, which under normal circumstances fell to her shoulders in a lusty, half-intended wave, was bound in a scarf. She’d knotted it above her forehead: leaf-green paisleys on turquoise ground. “What’s with the headgear?” I asked. “Ach,” Nancy said, letting her hand fall loose from the wrist, “the hairdresser.” She drew a cigarette from the low pocket of her robe, lit it. Behind her, the sun was coming full into the sky: a red intrusion. I siphoned tepid coffee through my lips and let it sit in the hollow of my tongue. Nancy dragged and dragged. “Well,” I said, wanting a cigarette myself, “what happened?” “What happened?” Nancy repeated. “I’ll tell you what happened. I go in to see Joanne, same as always, go in for the same number 3B moss frost glaze I’ve been getting the last fifteen years, and phooey.” She mock-spit on the fraying wood. Phooey isn’t a word I hear often. I almost laughed, but my reptile brain outthought me and caught my tongue. But phooey: What could she have meant? “Surely it can’t be that bad,” I said, bland and easy. Sympathy is the hardest emotion to muster, and its imitation is always a shade flat, recognizably discordant. “Don’t pass judgment until you’ve witnessed the subject to be judged,” Old Nancy said, pausing before a huge final drag. I like to think that she wagged her finger 49