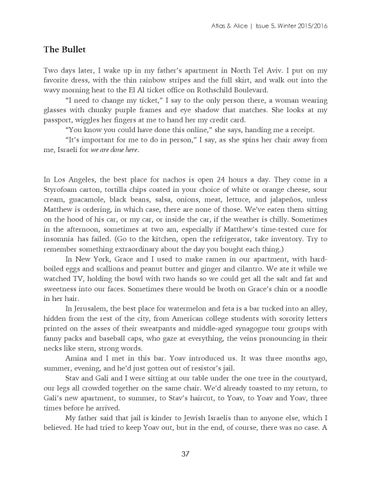 The Bullet Two days later, I wake up in my father’s apartment in North Tel Aviv. I put on my favorite dress, with the thin rainbow stripes and the full skirt, and walk out into the wavy morning heat to the El Al ticket office on Rothschild Boulevard. “I need to change my ticket,” I say to the only person there, a woman wearing glasses with chunky purple frames and eye shadow that matches. She looks at my passport, wiggles her fingers at me to hand her my credit card. “You know you could have done this online,” she says, handing me a receipt. “It’s important for me to do in person,” I say, as she spins her chair away from me, Israeli for we are done here.

In Los Angeles, the best place for nachos is open 24 hours a day. They come in a Styrofoam carton, tortilla chips coated in your choice of white or orange cheese, sour cream, guacamole, black beans, salsa, onions, meat, lettuce, and jalapeños, unless Matthew is ordering, in which case, there are none of those. We’ve eaten them sitting on the hood of his car, or my car, or inside the car, if the weather is chilly. Sometimes in the afternoon, sometimes at two am, especially if Matthew’s time-tested cure for insomnia has failed. (Go to the kitchen, open the refrigerator, take inventory. Try to remember something extraordinary about the day you bought each thing.) In New York, Grace and I used to make ramen in our apartment, with hardboiled eggs and scallions and peanut butter and ginger and cilantro. We ate it while we watched TV, holding the bowl with two hands so we could get all the salt and fat and sweetness into our faces. Sometimes there would be broth on Grace’s chin or a noodle in her hair. In Jerusalem, the best place for watermelon and feta is a bar tucked into an alley, hidden from the rest of the city, from American college students with sorority letters printed on the asses of their sweatpants and middle-aged synagogue tour groups with fanny packs and baseball caps, who gaze at everything, the veins pronouncing in their necks like stern, strong words. Amina and I met in this bar. Yoav introduced us. It was three months ago, summer, evening, and he’d just gotten out of resistor’s jail. Stav and Gali and I were sitting at our table under the one tree in the courtyard, our legs all crowded together on the same chair. We’d already toasted to my return, to Gali’s new apartment, to summer, to Stav’s haircut, to Yoav, to Yoav and Yoav, three times before he arrived. My father said that jail is kinder to Jewish Israelis than to anyone else, which I believed. He had tried to keep Yoav out, but in the end, of course, there was no case. A 37