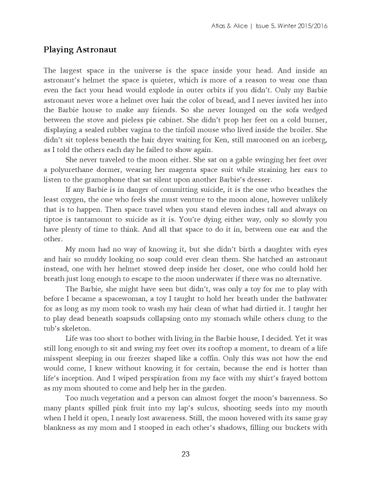 Playing Astronaut The largest space in the universe is the space inside your head. And inside an astronaut’s helmet the space is quieter, which is more of a reason to wear one than even the fact your head would explode in outer orbits if you didn’t. Only my Barbie astronaut never wore a helmet over hair the color of bread, and I never invited her into the Barbie house to make any friends. So she never lounged on the sofa wedged between the stove and pieless pie cabinet. She didn’t prop her feet on a cold burner, displaying a sealed rubber vagina to the tinfoil mouse who lived inside the broiler. She didn’t sit topless beneath the hair dryer waiting for Ken, still marooned on an iceberg, as I told the others each day he failed to show again. She never traveled to the moon either. She sat on a gable swinging her feet over a polyurethane dormer, wearing her magenta space suit while straining her ears to listen to the gramophone that sat silent upon another Barbie’s dresser. If any Barbie is in danger of committing suicide, it is the one who breathes the least oxygen, the one who feels she must venture to the moon alone, however unlikely that is to happen. Then space travel when you stand eleven inches tall and always on tiptoe is tantamount to suicide as it is. You’re dying either way, only so slowly you have plenty of time to think. And all that space to do it in, between one ear and the other. My mom had no way of knowing it, but she didn’t birth a daughter with eyes and hair so muddy looking no soap could ever clean them. She hatched an astronaut instead, one with her helmet stowed deep inside her closet, one who could hold her breath just long enough to escape to the moon underwater if there was no alternative. The Barbie, she might have seen but didn’t, was only a toy for me to play with before I became a spacewoman, a toy I taught to hold her breath under the bathwater for as long as my mom took to wash my hair clean of what had dirtied it. I taught her to play dead beneath soapsuds collapsing onto my stomach while others clung to the tub’s skeleton. Life was too short to bother with living in the Barbie house, I decided. Yet it was still long enough to sit and swing my feet over its rooftop a moment, to dream of a life misspent sleeping in our freezer shaped like a coffin. Only this was not how the end would come, I knew without knowing it for certain, because the end is hotter than life’s inception. And I wiped perspiration from my face with my shirt’s frayed bottom as my mom shouted to come and help her in the garden. Too much vegetation and a person can almost forget the moon’s barrenness. So many plants spilled pink fruit into my lap’s sulcus, shooting seeds into my mouth when I held it open, I nearly lost awareness. Still, the moon hovered with its same gray blankness as my mom and I stooped in each other’s shadows, filling our buckets with 23