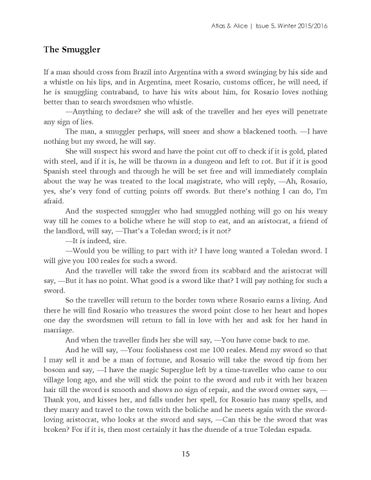 The Smuggler If a man should cross from Brazil into Argentina with a sword swinging by his side and a whistle on his lips, and in Argentina, meet Rosario, customs officer, he will need, if he is smuggling contraband, to have his wits about him, for Rosario loves nothing better than to search swordsmen who whistle. —Anything to declare? she will ask of the traveller and her eyes will penetrate any sign of lies. The man, a smuggler perhaps, will sneer and show a blackened tooth. —I have nothing but my sword, he will say. She will suspect his sword and have the point cut off to check if it is gold, plated with steel, and if it is, he will be thrown in a dungeon and left to rot. But if it is good Spanish steel through and through he will be set free and will immediately complain about the way he was treated to the local magistrate, who will reply, —Ah, Rosario, yes, she’s very fond of cutting points off swords. But there’s nothing I can do, I’m afraid. And the suspected smuggler who had smuggled nothing will go on his weary way till he comes to a boliche where he will stop to eat, and an aristocrat, a friend of the landlord, will say, —That’s a Toledan sword; is it not? —It is indeed, sire. —Would you be willing to part with it? I have long wanted a Toledan sword. I will give you 100 reales for such a sword. And the traveller will take the sword from its scabbard and the aristocrat will say, —But it has no point. What good is a sword like that? I will pay nothing for such a sword. So the traveller will return to the border town where Rosario earns a living. And there he will find Rosario who treasures the sword point close to her heart and hopes one day the swordsmen will return to fall in love with her and ask for her hand in marriage. And when the traveller finds her she will say, —You have come back to me. And he will say, —Your foolishness cost me 100 reales. Mend my sword so that I may sell it and be a man of fortune, and Rosario will take the sword tip from her bosom and say, —I have the magic Superglue left by a time-traveller who came to our village long ago, and she will stick the point to the sword and rub it with her brazen hair till the sword is smooth and shows no sign of repair, and the sword owner says, — Thank you, and kisses her, and falls under her spell, for Rosario has many spells, and they marry and travel to the town with the boliche and he meets again with the swordloving aristocrat, who looks at the sword and says, —Can this be the sword that was broken? For if it is, then most certainly it has the duende of a true Toledan espada. 15