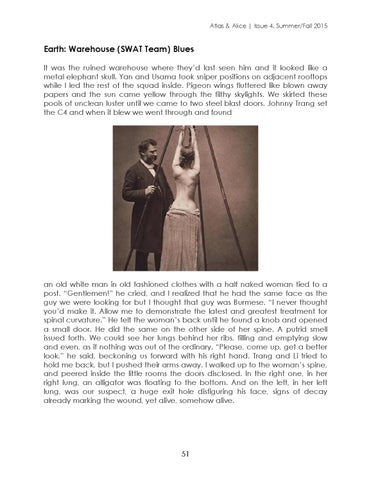 Earth: Warehouse (SWAT Team) Blues It was the ruined warehouse where they’d last seen him and it looked like a metal elephant skull. Yan and Usama took sniper positions on adjacent rooftops while I led the rest of the squad inside. Pigeon wings fluttered like blown away papers and the sun came yellow through the filthy skylights. We skirted these pools of unclean luster until we came to two steel blast doors. Johnny Trang set the C4 and when it blew we went through and found

an old white man in old fashioned clothes with a half naked woman tied to a post. “Gentlemen!” he cried, and I realized that he had the same face as the guy we were looking for but I thought that guy was Burmese. “I never thought you’d make it. Allow me to demonstrate the latest and greatest treatment for spinal curvature.” He felt the woman’s back until he found a knob and opened a small door. He did the same on the other side of her spine. A putrid smell issued forth. We could see her lungs behind her ribs, filling and emptying slow and even, as if nothing was out of the ordinary. “Please, come up, get a better look,” he said, beckoning us forward with his right hand. Trang and Li tried to hold me back, but I pushed their arms away. I walked up to the woman’s spine, and peered inside the little rooms the doors disclosed. In the right one, in her right lung, an alligator was floating to the bottom. And on the left, in her left lung, was our suspect, a huge exit hole disfiguring his face, signs of decay already marking the wound, yet alive, somehow alive.