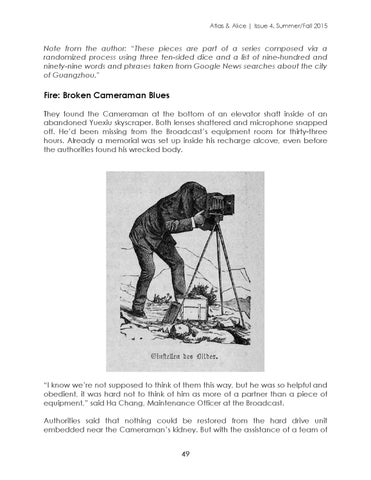 Note from the author: “These pieces are part of a series composed via a randomized process using three ten-sided dice and a list of nine-hundred and ninety-nine words and phrases taken from Google News searches about the city of Guangzhou.”

Fire: Broken Cameraman Blues They found the Cameraman at the bottom of an elevator shaft inside of an abandoned Yuexiu skyscraper. Both lenses shattered and microphone snapped off. He’d been missing from the Broadcast’s equipment room for thirty-three hours. Already a memorial was set up inside his recharge alcove, even before the authorities found his wrecked body.

“I know we’re not supposed to think of them this way, but he was so helpful and obedient, it was hard not to think of him as more of a partner than a piece of equipment,” said Ha Chang, Maintenance Officer at the Broadcast. Authorities said that nothing could be restored from the hard drive unit embedded near the Cameraman’s kidney. But with the assistance of a team of 49