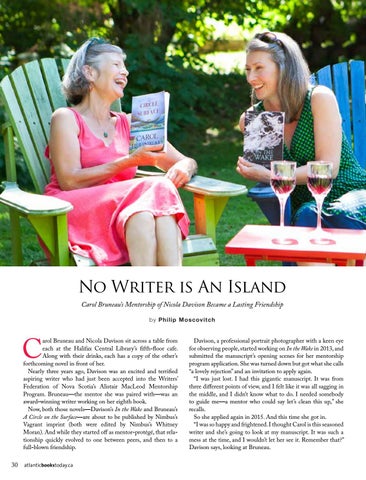 arol Bruneau and Nicola Davison sit across a table from each at the Halifax Central Library’s fifth-floor cafe. Along with their drinks, each has a copy of the other’s forthcoming novel in front of her. Nearly three years ago, Davison was an excited and terrified aspiring writer who had just been accepted into the Writers’ Federation of Nova Scotia’s Alistair MacLeod Mentorship Program. Bruneau—the mentor she was paired with—was an award-winning writer working on her eighth book. Now, both those novels—Davison’s In the Wake and Bruneau’s A Circle on the Surface—are about to be published by Nimbus’s Vagrant imprint (both were edited by Nimbus’s Whitney Moran). And while they started off as mentor-protégé, that relationship quickly evolved to one between peers, and then to a full-blown friendship.

Davison, a professional portrait photographer with a keen eye for observing people, started working on In the Wake in 2013, and submitted the manuscript’s opening scenes for her mentorship program application. She was turned down but got what she calls “a lovely rejection” and an invitation to apply again. “I was just lost. I had this gigantic manuscript. It was from three different points of view, and I felt like it was all sagging in the middle, and I didn’t know what to do. I needed somebody to guide me—a mentor who could say let’s clean this up,” she recalls. So she applied again in 2015. And this time she got in. “I was so happy and frightened. I thought Carol is this seasoned writer and she’s going to look at my manuscript. It was such a mess at the time, and I wouldn’t let her see it. Remember that?” Davison says, looking at Bruneau. 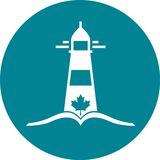