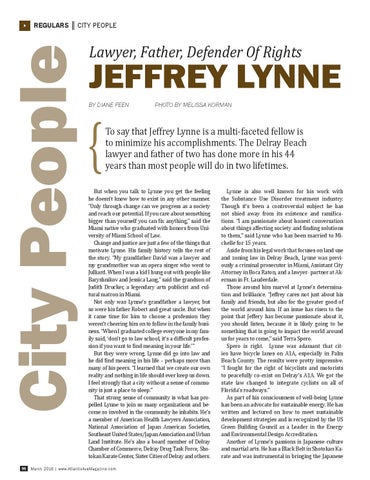 To say that Jeffrey Lynne is a multi-faceted fellow is to minimize his accomplishments. The Delray Beach lawyer and father of two has done more in his 44 years than most people will do in two lifetimes.

But when you talk to Lynne you get the feeling he doesn’t know how to exist in any other manner. “Only through change can we progress as a society and reach our potential. If you care about something bigger than yourself you can fix anything,” said the Miami native who graduated with honors from University of Miami School of Law. Change and justice are just a few of the things that motivate Lynne. His family history tells the rest of the story. “My grandfather David was a lawyer and my grandmother was an opera singer who went to Julliard. When I was a kid I hung out with people like Baryshnikov and Jessica Lang,” said the grandson of Judith Drucker, a legendary arts publicist and cultural matron in Miami. Not only was Lynne’s grandfather a lawyer, but so were his father Robert and great uncle. But when it came time for him to choose a profession they weren’t cheering him on to follow in the family business. “When I graduated college everyone in my family said, ‘don’t go to law school, it’s a difficult profession if you want to find meaning in your life.’” But they were wrong. Lynne did go into law and he did find meaning in his life – perhaps more than many of his peers. “I learned that we create our own reality and nothing in life should ever keep us down. I feel strongly that a city without a sense of community is just a place to sleep.” That strong sense of community is what has propelled Lynne to join so many organizations and become so involved in the community he inhabits. He’s a member of American Health Lawyers Association, National Association of Japan American Societies, Southeast United States/Japan Association and Urban Land Institute. He’s also a board member of Delray Chamber of Commerce, Delray Drug Task Force, Shotokan Karate Center, Sister Cities of Delray and others.

Lynne is also well known for his work with the Substance Use Disorder treatment industry. Though it’s been a controversial subject he has not shied away from its existence and ramifications. “I am passionate about honest conversation about things affecting society and finding solutions to them,” said Lynne who has been married to Michelle for 15 years. Aside from his legal work that focuses on land use and zoning law in Delray Beach, Lynne was previously a criminal prosecutor in Miami, Assistant City Attorney in Boca Raton, and a lawyer- partner at Akerman in Ft. Lauderdale. Those around him marvel at Lynne’s determination and brilliance. “Jeffrey cares not just about his family and friends, but also for the greater good of the world around him. If an issue has risen to the point that Jeffery has become passionate about it, you should listen, because it is likely going to be something that is going to impact the world around us for years to come,” said Terra Spero. Spero is right. Lynne was adamant that cities have bicycle lanes on A1A, especially in Palm Beach County. The results were pretty impressive. “I fought for the right of bicyclists and motorists to peacefully co-exist on Delray’s A1A. We got the state law changed to integrate cyclists on all of Florida’s roadways.” As part of his consciousness of well-being Lynne has been an advocate for sustainable energy. He has written and lectured on how to meet sustainable development strategies and is recognized by the US Green Building Council as a Leader in the Energy and Environmental Design Accreditation. Another of Lynne’s passions is Japanese culture and martial arts. He has a Black Belt in Shotokan Karate and was instrumental in bringing the Japanese 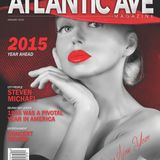