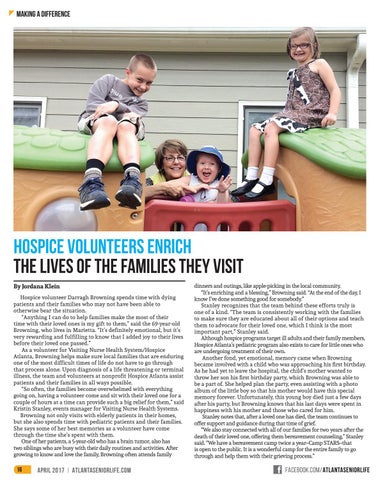 hospice Volunteers enrich the lives of the families they VISIT By Jordana Klein Hospice volunteer Darragh Browning spends time with dying patients and their families who may not have been able to otherwise bear the situation. “Anything I can do to help families make the most of their time with their loved ones is my gift to them,” said the 69-year-old Browning, who lives in Marietta. “It’s definitely emotional, but it’s very rewarding and fulfilling to know that I added joy to their lives before their loved one passed.” As a volunteer for Visiting Nurse Health System/Hospice Atlanta, Browning helps make sure local families that are enduring one of the most difficult times of life do not have to go through that process alone. Upon diagnosis of a life threatening or terminal illness, the team and volunteers at nonprofit Hospice Atlanta assist patients and their families in all ways possible. “So often, the families become overwhelmed with everything going on, having a volunteer come and sit with their loved one for a couple of hours at a time can provide such a big relief for them,” said Kristin Stanley, events manager for Visiting Nurse Health Systems. Browning not only visits with elderly patients in their homes, but she also spends time with pediatric patients and their families. She says some of her best memories as a volunteer have come through the time she’s spent with them. One of her patients, a 5-year-old who has a brain tumor, also has two siblings who are busy with their daily routines and activities. After growing to know and love the family, Browning often attends family

dinners and outings, like apple-picking in the local community. “It’s enriching and a blessing,” Browning said. “At the end of the day, I know I’ve done something good for somebody.” Stanley recognizes that the team behind these efforts truly is one of a kind. “The team is consistently working with the families to make sure they are educated about all of their options and teach them to advocate for their loved one, which I think is the most important part,” Stanley said. Although hospice programs target ill adults and their family members, Hospice Atlanta’s pediatric program also exists to care for little ones who are undergoing treatment of their own. Another fond, yet emotional, memory came when Browning became involved with a child who was approaching his first birthday. As he had yet to leave the hospital, the child’s mother wanted to throw her son his first birthday party, which Browning was able to be a part of. She helped plan the party, even assisting with a photo album of the little boy so that his mother would have this special memory forever. Unfortunately, this young boy died just a few days after his party, but Browning knows that his last days were spent in happiness with his mother and those who cared for him. Stanley notes that, after a loved one has died, the team continues to offer support and guidance during that time of grief. “We also stay connected with all of our families for two years after the death of their loved one, offering them bereavement counseling,” Stanley said. “We have a bereavement camp twice a year–Camp STARS–that is open to the public. It is a wonderful camp for the entire family to go through and help them with their grieving process.” 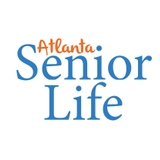