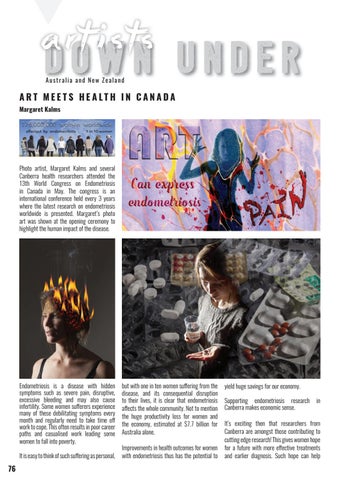 Photo artist, Margaret Kalms and several Canberra health researchers attended the 13th World Congress on Endometriosis in Canada in May. The congress is an international conference held every 3 years where the latest research on endometriosis worldwide is presented. Margaretâ&amp;#x20AC;&amp;#x2122;s photo art was shown at the opening ceremony to highlight the human impact of the disease.

Endometriosis is a disease with hidden symptoms such as severe pain, disruptive, excessive bleeding and may also cause infertility. Some women sufferers experience many of these debilitating symptoms every month and regularly need to take time off work to cope. This often results in poor career paths and casualised work leading some women to fall into poverty. It is easy to think of such suffering as personal,

but with one in ten women suffering from the disease, and its consequential disruption to their lives, it is clear that endometriosis affects the whole community. Not to mention the huge productivity loss for women and the economy, estimated at $7.7 billion for Australia alone. Improvements in health outcomes for women with endometriosis thus has the potential to

Itâ&amp;#x20AC;&amp;#x2122;s exciting then that researchers from Canberra are amongst those contributing to cutting edge research! This gives women hope for a future with more effective treatments and earlier diagnosis. Such hope can help

Digital art works from the members of the Artists Down Under - Australia and New Zealand group.