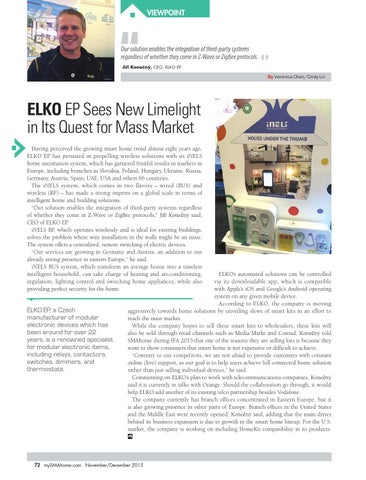 regardless of whether they come in Z-Wave or ZigBee protocols. JiĢi KoneĀný, CEO, ELKO EP

ELKO EP Sees New Limelight in Its Quest for Mass Market Having perceived the growing smart home trend almost eight years ago, ELKO EP has persisted in propelling wireless solutions with its iNELS home automation system, which has garnered fruitful results in markets in Europe, including branches in Slovakia, Poland, Hungary, Ukraine, Russia, Germany, Austria, Spain, UAE, USA and others 66 countries. The iNELS system, which comes in two flavors – wired (BUS) and wireless (RF) – has made a strong imprint on a global scale in terms of intelligent home and building solutions. “Our solution enables the integration of third-party systems regardless of whether they come in Z-Wave or ZigBee protocols,” Jiŉí KoneĀný said, CEO of ELKO EP. iNELS RF, which operates wirelessly and is ideal for existing buildings, solves the problem where wire installation in the walls might be an issue. The system offers a centralized, remote switching of electric devices. “Our services are growing in Germany and Austria, an addition to our already strong presence in eastern Europe,” he said. iNELS BUS system, which transform an average house into a timeless intelligent household, can take charge of heating and air-conditioning, regulation, lighting control and switching home appliances, while also providing perfect security for the home.

ELKO’s automated solutions can be controlled via its downloadable app, which is compatible with Apple’s iOS and Google’s Android operating system on any given mobile device. According to ELKO, the company is moving aggressively towards home solutions by unveiling slews of smart kits in an effort to reach the mass market. While the company hopes to sell these smart kits to wholesalers, these kits will also be sold through retail channels such as Media Markt and Conrad. KoneĀný told SMAhome during IFA 2015 that one of the reasons they are selling kits is because they want to show consumers that smart home is not expensive or difﬁcult to achieve. “Contrary to our competitors, we are not afraid to provide customers with constant online (live) support, as our goal is to help users achieve full connected home solution rather than just selling individual devices,” he said. Commenting on ELKO’s plan to work with telecommunications companies, KoneĀný said it is currently in talks with Orange. Should the collaboration go through, it would help ELKO add another of its existing telco partnership besides Vodafone. The company currently has branch offices concentrated in Eastern Europe, but it is also growing presence in other parts of Europe. Branch ofﬁces in the United States and the Middle East were recently opened, KoneĀný said, adding that the main driver behind its business expansion is due to growth in the smart home lineup. For the U.S. market, the company is working on including HomeKit compatibility in its products. 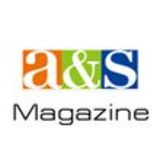