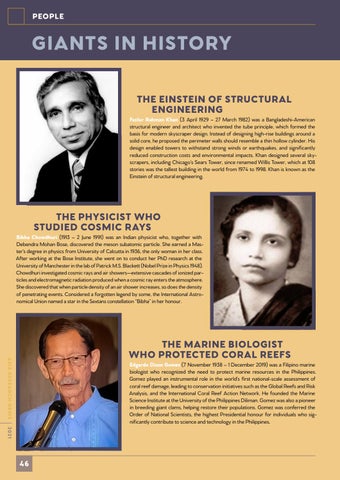 GIANTS IN HISTORY THE EINSTEIN OF STRUCTURAL ENGINEERING

Fazlur Rahman Khan (3 April 1929 – 27 March 1982) was a Bangladeshi-American structural engineer and architect who invented the tube principle, which formed the basis for modern skyscraper design. Instead of designing high-rise buildings around a solid core, he proposed the perimeter walls should resemble a thin hollow cylinder. His design enabled towers to withstand strong winds or earthquakes, and significantly reduced construction costs and environmental impacts. Khan designed several skyscrapers, including Chicago’s Sears Tower, since renamed Willis Tower, which at 108 stories was the tallest building in the world from 1974 to 1998. Khan is known as the Einstein of structural engineering.

THE PHYSICIST WHO STUDIED COSMIC RAYS

Bibha Chowdhuri (1913 – 2 June 1991) was an Indian physicist who, together with Debendra Mohan Bose, discovered the meson subatomic particle. She earned a Master’s degree in physics from University of Calcutta in 1936, the only woman in her class. After working at the Bose Institute, she went on to conduct her PhD research at the University of Manchester in the lab of Patrick M.S. Blackett (Nobel Prize in Physics 1948). Chowdhuri investigated cosmic rays and air showers—extensive cascades of ionized particles and electromagnetic radiation produced when a cosmic ray enters the atmosphere. She discovered that when particle density of an air shower increases, so does the density of penetrating events. Considered a forgotten legend by some, the International Astronomical Union named a star in the Sextans constellation “Bibha” in her honour.

Edgardo Dizon Gomez (7 November 1938 – 1 December 2019) was a Filipino marine biologist who recognized the need to protect marine resources in the Philippines. Gomez played an instrumental role in the world’s first national-scale assessment of coral reef damage, leading to conservation initiatives such as the Global Reefs and Risk Analysis, and the International Coral Reef Action Network. He founded the Marine Science Institute at the University of the Philippines Diliman. Gomez was also a pioneer in breeding giant clams, helping restore their populations. Gomez was conferred the Order of National Scientists, the highest Presidential honour for individuals who significantly contribute to science and technology in the Philippines.