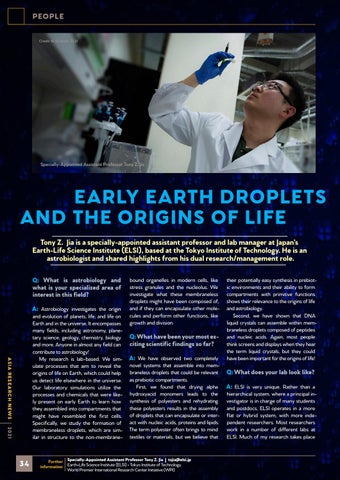 EARLY EARTH DROPLETS AND THE ORIGINS OF LIFE Tony Z. Jia is a specially-appointed assistant professor and lab manager at Japan’s Earth-Life Science Institute (ELSI), based at the Tokyo Institute of Technology. He is an astrobiologist and shared highlights from his dual research/management role. Q: What is astrobiology and what is your specialized area of interest in this field? A: Astrobiology investigates the origin

and evolution of planets, life, and life on Earth and in the universe. It encompasses many fields, including astronomy, planetary science, geology, chemistry, biology and more. Anyone in almost any field can contribute to astrobiology! My research is lab-based. We simulate processes that aim to reveal the origins of life on Earth, which could help us detect life elsewhere in the universe. Our laboratory simulations utilize the processes and chemicals that were likely present on early Earth to learn how they assembled into compartments that might have resembled the first cells. Specifically, we study the formation of membraneless droplets, which are similar in structure to the non-membrane-

bound organelles in modern cells, like stress granules and the nucleolus. We investigate what these membraneless droplets might have been composed of, and if they can encapsulate other molecules and perform other functions, like growth and division.

Q: What have been your most exciting scientific findings so far? A: We have observed two completely

novel systems that assemble into membraneless droplets that could be relevant as prebiotic compartments. First, we found that drying alpha hydroxyacid monomers leads to the synthesis of polyesters and rehydrating these polyesters results in the assembly of droplets that can encapsulate or interact with nucleic acids, proteins and lipids. The term polyester often brings to mind textiles or materials, but we believe that

their potentially easy synthesis in prebiotic environments and their ability to form compartments with primitive functions shows their relevance to the origins of life and astrobiology. Second, we have shown that DNA liquid crystals can assemble within membraneless droplets composed of peptides and nucleic acids. Again, most people think screens and displays when they hear the term liquid crystals, but they could have been important for the origins of life!

Q: What does your lab look like? A: ELSI is very unique. Rather than a

hierarchical system, where a principal investigator is in charge of many students and postdocs, ELSI operates in a more flat or hybrid system, with more independent researchers. Most researchers work in a number of different labs at ELSI. Much of my research takes place