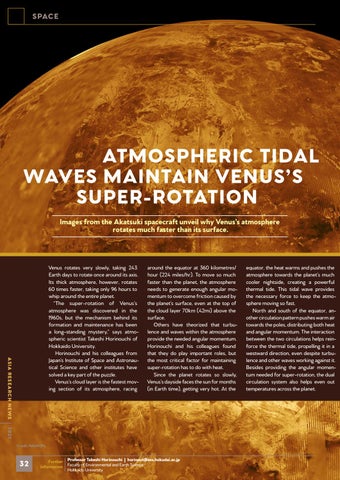 Venus rotates very slowly, taking 243 Earth days to rotate once around its axis. Its thick atmosphere, however, rotates 60 times faster, taking only 96 hours to whip around the entire planet. “The super-rotation of Venus’s atmosphere was discovered in the 1960s, but the mechanism behind its formation and maintenance has been a long-standing mystery,” says atmospheric scientist Takeshi Horinouchi of Hokkaido University. Horinouchi and his colleagues from Japan’s Institute of Space and Astronautical Science and other institutes have solved a key part of the puzzle. Venus’s cloud layer is the fastest moving section of its atmosphere, racing

around the equator at 360 kilometres/ hour (224 miles/hr). To move so much faster than the planet, the atmosphere needs to generate enough angular momentum to overcome friction caused by the planet’s surface, even at the top of the cloud layer 70km (42mi) above the surface. Others have theorized that turbulence and waves within the atmosphere provide the needed angular momentum. Horinouchi and his colleagues found that they do play important roles, but the most critical factor for maintaining super-rotation has to do with heat. Since the planet rotates so slowly, Venus’s dayside faces the sun for months (in Earth time), getting very hot. At the

equator, the heat warms and pushes the atmosphere towards the planet’s much cooler nightside, creating a powerful thermal tide. This tidal wave provides the necessary force to keep the atmosphere moving so fast. North and south of the equator, another circulation pattern pushes warm air towards the poles, distributing both heat and angular momentum. The interaction between the two circulations helps reinforce the thermal tide, propelling it in a westward direction, even despite turbulence and other waves working against it. Besides providing the angular momentum needed for super-rotation, the dual circulation system also helps even out temperatures across the planet.