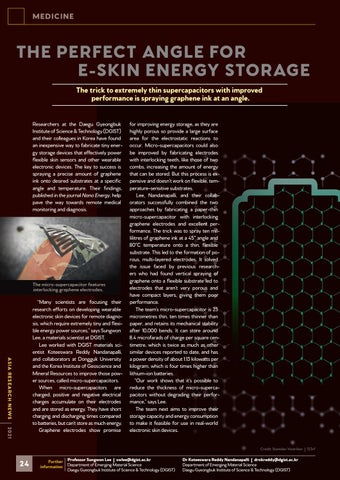 THE PERFECT ANGLE FOR E-SKIN ENERGY STORAGE The trick to extremely thin supercapacitors with improved performance is spraying graphene ink at an angle. Researchers at the Daegu Gyeongbuk Institute of Science &amp; Technology (DGIST) and their colleagues in Korea have found an inexpensive way to fabricate tiny energy storage devices that effectively power flexible skin sensors and other wearable electronic devices. The key to success is spraying a precise amount of graphene ink onto desired substrates at a specific angle and temperature. Their findings, published in the journal Nano Energy, help pave the way towards remote medical monitoring and diagnosis. Credit: DGIST

“Many scientists are focusing their research efforts on developing wearable electronic skin devices for remote diagnosis, which require extremely tiny and flexible energy power sources,” says Sungwon Lee, a materials scientist at DGIST. Lee worked with DGIST materials scientist Koteeswara Reddy Nandanapalli, and collaborators at Dongguk University and the Korea Institute of Geoscience and Mineral Resources to improve those power sources, called micro-supercapacitors. When micro-supercapacitors are charged, positive and negative electrical charges accumulate on their electrodes and are stored as energy. They have short charging and discharging times compared to batteries, but can’t store as much energy. Graphene electrodes show promise

for improving energy storage, as they are highly porous so provide a large surface area for the electrostatic reactions to occur. Micro-supercapacitors could also be improved by fabricating electrodes with interlocking teeth, like those of two combs, increasing the amount of energy that can be stored. But this process is expensive and doesn’t work on flexible, temperature-sensitive substrates. Lee, Nandanapalli, and their collaborators successfully combined the two approaches by fabricating a paper-thin micro-supercapacitor with interlocking graphene electrodes and excellent performance. The trick was to spray ten millilitres of graphene ink at a 45° angle and 80°C temperature onto a thin, flexible substrate. This led to the formation of porous, multi-layered electrodes. It solved the issue faced by previous researchers who had found vertical spraying of graphene onto a flexible substrate led to electrodes that aren’t very porous and have compact layers, giving them poor performance. The team’s micro-supercapacitor is 23 micrometres thin, ten times thinner than paper, and retains its mechanical stability after 10,000 bends. It can store around 8.4 microfarads of charge per square centimetre, which is twice as much as other similar devices reported to date, and has a power density of about 1.13 kilowatts per kilogram, which is four times higher than lithium-ion batteries. “Our work shows that it’s possible to reduce the thickness of micro-supercapacitors without degrading their performance,” says Lee. The team next aims to improve their storage capacity and energy consumption to make it feasible for use in real-world electronic skin devices. Credit: Stanislav Vostrikov | 123rf