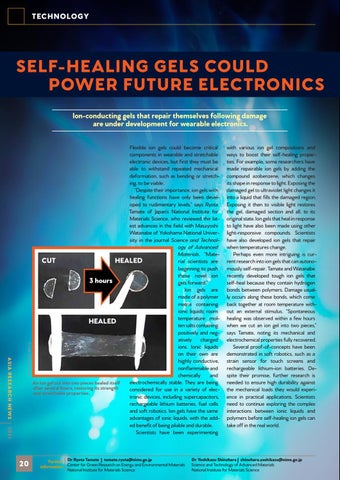 SELF-HEALING GELS COULD POWER FUTURE ELECTRONICS Ion-conducting gels that repair themselves following damage are under development for wearable electronics.

An ion gel cut into two pieces healed itself after several hours, restoring its strength and stretchable properties.

Flexible ion gels could become critical components in wearable and stretchable electronic devices, but first they must be able to withstand repeated mechanical deformation, such as bending or stretching, to be viable. “Despite their importance, ion gels with healing functions have only been developed to rudimentary levels,” says Ryota Tamate of Japan’s National Institute for Materials Science, who reviewed the latest advances in the field with Masayoshi Watanabe of Yokohama National University in the journal Science and Technology of Advanced Materials. “Material scientists are beginning to push these novel ion gels forward.” Ion gels are made of a polymer matrix containing ionic liquids: room temperature molten salts containing positively and negatively charged ions. Ionic liquids on their own are highly conductive, nonflammable and chemically and electrochemically stable. They are being considered for use in a variety of electronic devices, including supercapacitors, rechargeable lithium batteries, fuel cells and soft robotics. Ion gels have the same advantages of ionic liquids, with the added benefit of being pliable and durable. Scientists have been experimenting

with various ion gel compositions and ways to boost their self-healing properties. For example, some researchers have made repairable ion gels by adding the compound azobenzene, which changes its shape in response to light. Exposing the damaged gel to ultraviolet light changes it into a liquid that fills the damaged region. Exposing it then to visible light restores the gel, damaged section and all, to its original state. Ion gels that heal in response to light have also been made using other light-responsive compounds. Scientists have also developed ion gels that repair when temperatures change. Perhaps even more intriguing is current research into ion gels that can autonomously self-repair. Tamate and Watanabe recently developed tough ion gels that self-heal because they contain hydrogen bonds between polymers. Damage usually occurs along these bonds, which come back together at room temperature without an external stimulus. “Spontaneous healing was observed within a few hours when we cut an ion gel into two pieces,” says Tamate, noting its mechanical and electrochemical properties fully recovered. Several proof-of-concepts have been demonstrated in soft robotics, such as a strain sensor for touch screens and rechargeable lithium-ion batteries. Despite their promise, further research is needed to ensure high durability against the mechanical loads they would experience in practical applications. Scientists need to continue exploring the complex interactions between ionic liquids and polymers before self-healing ion gels can take off in the real world.