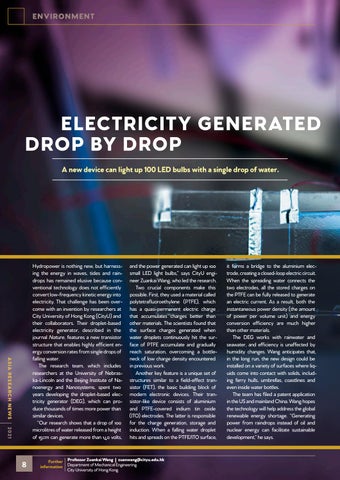 ELECTRICITY GENERATED DROP BY DROP A new device can light up 100 LED bulbs with a single drop of water.

Hydropower is nothing new, but harnessing the energy in waves, tides and raindrops has remained elusive because conventional technology does not efficiently convert low-frequency kinetic energy into electricity. That challenge has been overcome with an invention by researchers at City University of Hong Kong (CityU) and their collaborators. Their droplet-based electricity generator, described in the journal Nature, features a new transistor structure that enables highly efficient energy conversion rates from single drops of falling water. The research team, which includes researchers at the University of Nebraska-Lincoln and the Beijing Institute of Nanoenergy and Nanosystems, spent two years developing the droplet-based electricity generator (DEG), which can produce thousands of times more power than similar devices. “Our research shows that a drop of 100 microlitres of water released from a height of 15cm can generate more than 140 volts,

and the power generated can light up 100 small LED light bulbs,” says CityU engineer Zuankai Wang, who led the research. Two crucial components make this possible. First, they used a material called polytetrafluoroethylene (PTFE), which has a quasi-permanent electric charge that accumulates charges better than other materials. The scientists found that the surface charges generated when water droplets continuously hit the surface of PTFE accumulate and gradually reach saturation, overcoming a bottleneck of low charge density encountered in previous work. Another key feature is a unique set of structures similar to a field-effect transistor (FET), the basic building block of modern electronic devices. Their transistor-like device consists of aluminium and PTFE-covered indium tin oxide (ITO) electrodes. The latter is responsible for the charge generation, storage and induction. When a falling water droplet hits and spreads on the PTFE/ITO surface,

it forms a bridge to the aluminium electrode, creating a closed-loop electric circuit. When the spreading water connects the two electrodes, all the stored charges on the PTFE can be fully released to generate an electric current. As a result, both the instantaneous power density (the amount of power per volume unit) and energy conversion efficiency are much higher than other materials. The DEG works with rainwater and seawater, and efficiency is unaffected by humidity changes. Wang anticipates that, in the long run, the new design could be installed on a variety of surfaces where liquids come into contact with solids, including ferry hulls, umbrellas, coastlines and even inside water bottles. The team has filed a patent application in the US and mainland China. Wang hopes the technology will help address the global renewable energy shortage. “Generating power from raindrops instead of oil and nuclear energy can facilitate sustainable development,” he says.