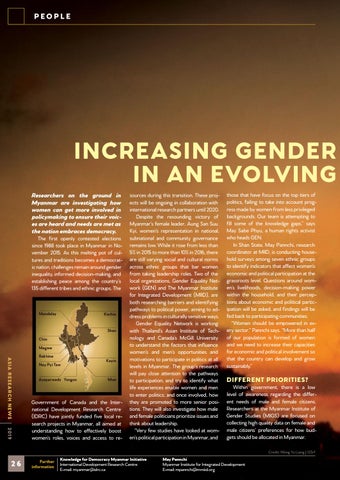 INCREASING GENDER IN AN EVOLVING Researchers on the ground in Myanmar are investigating how women can get more involved in policymaking to ensure their voices are heard and needs are met as the nation embraces democracy.

The first openly contested elections since 1988 took place in Myanmar in November 2015. As this melting pot of cultures and traditions becomes a democratic nation, challenges remain around gender inequality, informed decision-making, and establishing peace among the country’s 135 different tribes and ethnic groups. The

Government of Canada and the International Development Research Centre (IDRC) have jointly funded five local research projects in Myanmar, all aimed at understanding how to effectively boost women’s roles, voices and access to re-

sources during this transition. These projects will be ongoing in collaboration with international research partners until 2020. Despite the resounding victory of Myanmar’s female leader, Aung San Suu Kyi, women’s representation in national, subnational and community governance remains low. While it rose from less than 5% in 2015 to more than 10% in 2016, there are still varying social and cultural norms across ethnic groups that bar women from taking leadership roles. Two of the local organizations, Gender Equality Network (GEN) and The Myanmar Institute for Integrated Development (MIID), are both researching barriers and identifying pathways to political power, aiming to address problems in culturally sensitive ways. Gender Equality Network is working with Thailand’s Asian Institute of Technology and Canada’s McGill University to understand the factors that influence women’s and men’s opportunities and motivations to participate in politics at all levels in Myanmar. The group’s research will pay close attention to the pathways to participation, and try to identify what life experiences enable women and men to enter politics; and once involved, how they are promoted to more senior positions. They will also investigate how male and female politicians prioritize issues and think about leadership. “Very few studies have looked at women’s political participation in Myanmar, and

those that have focus on the top tiers of politics, failing to take into account progress made by women from less privileged backgrounds. Our team is attempting to fill some of the knowledge gaps,” says May Sabe Phyu, a human rights activist who heads GEN. In Shan State, May Pannchi, research coordinator at MIID, is conducting household surveys among seven ethnic groups to identify indicators that affect women’s economic and political participation at the grassroots level. Questions around women’s livelihoods, decision-making power within the household, and their perceptions about economic and political participation will be asked, and findings will be fed back to participating communities. “Women should be empowered in every sector,” Pannchi says. “More than half of our population is formed of women and we need to increase their capacities for economic and political involvement so that the country can develop and grow sustainably.”

Within government, there is a low level of awareness regarding the different needs of male and female citizens. Researchers at the Myanmar Institute of Gender Studies (MIGS) are focused on collecting high quality data on female and male citizens’ preferences for how budgets should be allocated in Myanmar. Credit: Wong Yu Liang | 123rf

Welcome to 2019 issue of Asia Research News. We are pleased to bring you the latest findings in medicine, technology, social sciences, space and environment from across Asia.