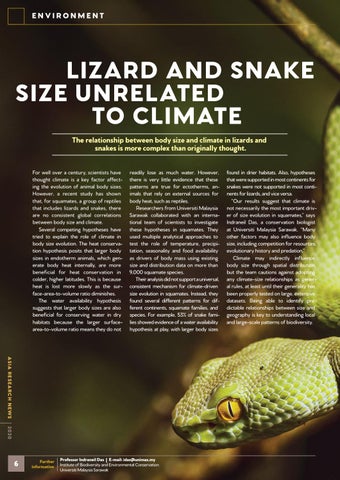 LIZARD AND SNAKE SIZE UNRELATED TO CLIMATE The relationship between body size and climate in lizards and snakes is more complex than originally thought. For well over a century, scientists have thought climate is a key factor affecting the evolution of animal body sizes. However, a recent study has shown that, for squamates, a group of reptiles that includes lizards and snakes, there are no consistent global correlations between body size and climate. Several competing hypotheses have tried to explain the role of climate in body size evolution. The heat conservation hypothesis posits that larger body sizes in endotherm animals, which generate body heat internally, are more beneficial for heat conservation in colder, higher latitudes. This is because heat is lost more slowly as the surface-area-to-volume ratio diminishes. The water availability hypothesis suggests that larger body sizes are also beneficial for conserving water in dry habitats because the larger surfacearea-to-volume ratio means they do not

readily lose as much water. However, there is very little evidence that these patterns are true for ectotherms, animals that rely on external sources for body heat, such as reptiles. Researchers from Universiti Malaysia Sarawak collaborated with an international team of scientists to investigate these hypotheses in squamates. They used multiple analytical approaches to test the role of temperature, precipitation, seasonality and food availability as drivers of body mass using existing size and distribution data on more than 9,000 squamate species. Their analysis did not support a universal, consistent mechanism for climate-driven size evolution in squamates. Instead, they found several different patterns for different continents, squamate families, and species. For example, 53% of snake families showed evidence of a water availability hypothesis at play, with larger body sizes

found in drier habitats. Also, hypotheses that were supported in most continents for snakes were not supported in most continents for lizards, and vice versa. “Our results suggest that climate is not necessarily the most important driver of size evolution in squamates,” says Indraneil Das, a conservation biologist at Universiti Malaysia Sarawak. “Many other factors may also influence body size, including competition for resources, evolutionary history and predation.” Climate may indirectly influence body size through spatial distribution, but the team cautions against adopting any climate-size relationships as general rules, at least until their generality has been properly tested on large, extensive datasets. Being able to identify predictable relationships between size and geography is key to understanding local and large-scale patterns of biodiversity.