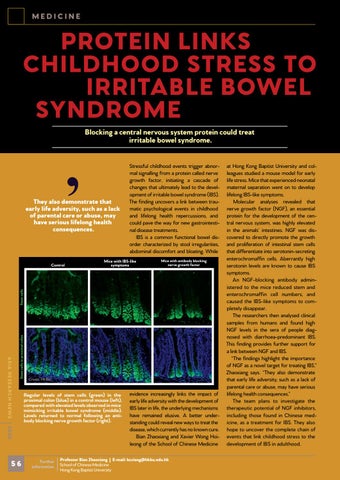 They also demonstrate that early life adversity, such as a lack of parental care or abuse, may have serious lifelong health consequences.

Stressful childhood events trigger abnormal signalling from a protein called nerve growth factor, initiating a cascade of changes that ultimately lead to the development of irritable bowel syndrome (IBS). The finding uncovers a link between traumatic psychological events in childhood and lifelong health repercussions, and could pave the way for new gastrointestinal disease treatments. IBS is a common functional bowel disorder characterized by stool irregularities, abdominal discomfort and bloating. While

evidence increasingly links the impact of early life adversity with the development of IBS later in life, the underlying mechanisms have remained elusive. A better understanding could reveal new ways to treat the disease, which currently has no known cure. Bian Zhaoxiang and Xavier Wong Hoileong of the School of Chinese Medicine

at Hong Kong Baptist University and colleagues studied a mouse model for early life stress. Mice that experienced neonatal maternal separation went on to develop lifelong IBS-like symptoms. Molecular analyses revealed that nerve growth factor (NGF), an essential protein for the development of the central nervous system, was highly elevated in the animals’ intestines. NGF was discovered to directly promote the growth and proliferation of intestinal stem cells that differentiate into serotonin-secreting enterochromaffin cells. Aberrantly high serotonin levels are known to cause IBS symptoms. An NGF-blocking antibody administered to the mice reduced stem and enterochromaffin cell numbers, and caused the IBS-like symptoms to completely disappear. The researchers then analysed clinical samples from humans and found high NGF levels in the sera of people diagnosed with diarrhoea-predominant IBS. This finding provides further support for a link between NGF and IBS. “The findings highlight the importance of NGF as a novel target for treating IBS,” Zhaoxiang says. “They also demonstrate that early life adversity, such as a lack of parental care or abuse, may have serious lifelong health consequences.” The team plans to investigate the therapeutic potential of NGF inhibitors, including those found in Chinese medicine, as a treatment for IBS. They also hope to uncover the complete chain of events that link childhood stress to the development of IBS in adulthood.